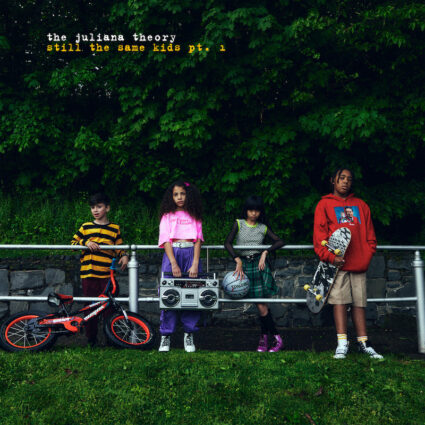 As genre-defining and genre-bending as ever, alt-emo-pop pioneers The Juliana Theory enter their next era from a position of both experience and excitement beginning with their powerfully defined single “Playback ‘99 (Burn The Cassette Deck).” “Playback…” kicks off the first of 3 intertwined EP’s slated for release on Equal Vision Records in 2022 and 2023 – “Still The Same Kids Pt. 1, 2, and 3” respectively with Pt. 1 releasing May 6, 2022. “Still The Same Kids Pt. 1” features 4 songs that fully embrace the strengths of the band’s catalog of underground anthems without sacrificing an ounce of who the duo is now. Truth be told, The Juliana Theory always owed as much to The Beatles as to Sunny Deal Real Estate, with shades and shimmers of everything from Depeche Mode and Tears For Fears to The Foo Fighters in their arsenal. Formed in 1997 and honored as “timeless,” and even “legendary” by media outlets Billboard, BrooklynVegan, Flood Magazine and beyond, The Juliana Theory is known widely as innovators in the guitar-driven-pop world. The band combined Fugazi-esque guitars and catchy bass-lines with overtly power pop hooks along with synths and drum machine flourishes years before bands like The 1975 followed a similar formula to superstardom.

About “Playback ‘99,” frontman Brett Detar comments “At a crossroads somewhere in the desert two diverging roads meet. One sand covered street is paved with a sweet nostalgia and the other is the asphalt of accepting a current moment and the speed at which everything seems to fly by on it. Lately I find myself struggling to find a balance between these two completely different paths. Do I have to choose one or the other? Can’t we somehow have both? On one hand I’ve always been quick to want to “burn the cassette deck” – to throw away the past and everything about it (including but not limited to what the band sounded like or was known for previously – as any listening to our catalog would suggest from one era to the next). On the other hand I have an appreciation and even a longing for certain memories or eras of the past. I’m not one of those people who looks back regularly and thinks that things were better back then. I tend to try and stay present and to make the most of the current moment but there still seems to be something lost from childhood. “Now I feel like I’m just not living if I’m just living in the past but I can’t help feeling like something’s missing, I can’t get back .”

Detar adds, “Musically Playback ’99 sounds exactly like this crossroads. It rides along hastily on top of layers of Joshua Fiedler’s signature guitars and energetic punk rock drums – an updated take on the band’s angstier, distorted-riff-driven songs and then makes an abrupt turn onto a hazier roadway featuring a cascade of overlaid vocal phrases before easing into a borderline dream sequence. “Time was the only thing we had. Now time’s gonna’ take all that we had.” Maybe we can have both. I think what I’ve always loved about music is its ability to NOT make us choose a road. As listeners we are free to be transported back to a moment while simultaneously inhabiting the present. In a song time can stand still and carry you metaphysically – almost spiritually – to another place. “Let’s get so high. Slow dance in time. Playback ’99.”

The ‘Still The Same Kids’ series is the follow up to the bands 2021 reimagined album “A Dream Away” which featured newly encapsulated versions of beloved songs from the band’s prior albums including the new and masterful ballad “Better Now.” After reuniting in 2019 the band embarked on a full US acoustic tour with The Spill Canvas and soon after partnered with Equal Vision Records to release their first single in well over a decade, “Can’t Go Home.” The Juliana Theory has since toured North America in celebration of the 20 year anniversary of their classic album ‘Emotion Is Dead’ including an appearance at Furnace Fest. Upcoming dates include the Psycho Fest in Las Vegas along with several soon to be announced festival and touring dates throughout North America.

Their songs remain a testament to the transformative power of music, transporting listeners backward and forward in time, from the cassette deck to the unknown. They are still the same kids, after all.