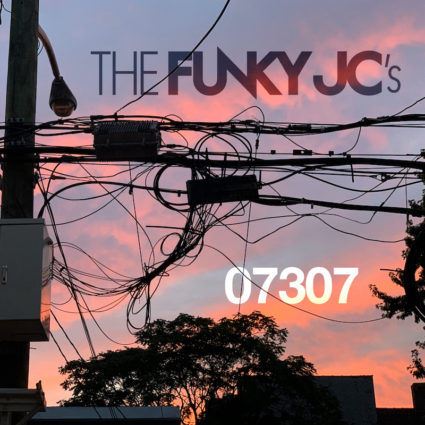 “The band draws from the legacy of Stax/Volt and Motown, Isaac Hayes film soundtracks, Hammond organ drones and 1970s funk rhythms while also delving into the avant-garde improvisations of bebop and modern jazz.” – Jim Testa | NJ.com

The Funky JC’s are Michael Advensky (drums, percussion), Arthur Rodriguez (guitars), and Mike Todd (bass, keyboards). All three members grew up in “The Heights” section of Jersey City, NJ, and this common background has influenced their unique approach to songwriting and improvisation. Michael, Arthur, and Mike have been together playing in different musical situations for 35 years but it wasn’t until 2020 that they found the time, motivation, and opportunity to write and record their debut release 07307.

Every song title of The Funky JC’s gives a nod to a location or experience in Jersey City, one of the most culturally diverse cities in America. The Funky JC’s view their music as an extension of the sounds of the Jersey City streets that they all have cherished, survived, and learned from.

This release is the one of the first for Mint 400 Records sub-label Raining Music. This sub-label is dedicated to jazz and instrumental music with an indie aesthetic.