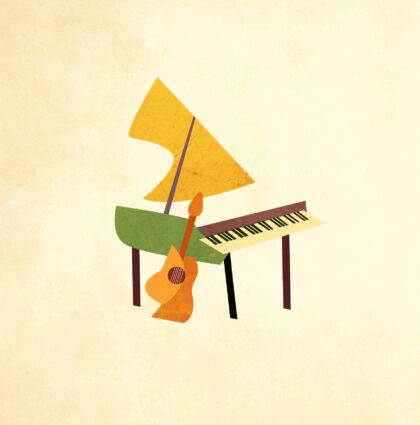 The Eighty Six Seas - This Is Just a Simple Song [EP]

The Eighty Six Seas is the moniker of Brooklyn-based Nick Stevens who crafts sharp thematic folk pop in the vein of Belle and Sebastian, The Magnetic Fields and David Gray.

Stevens was studying at the University of Connecticut when he first started crafting songs, finding his footing as a solo folk artist and later cutting his teeth with indie rock collective The Condescending Foxes. After seven years living in Boston, he moved to Brooklyn – a location that exposed him to a smörgåsbord of musical sounds and styles including baroque pop and electronica.

It was in this eclectic context that Nick found the key to record his folk material, placing his simple and sumptuous melodies and classic folk structures against a shifting vocabulary of radically different styles. “When I moved to Brooklyn, I finally found the confidence to record these songs and get them out into the world,” he asserts. In the tumultuous world of the pandemic, having a blistering new artistic avenue was Nick’s saving grace.

Not long after having this musical epiphany, The Eighty Six Seas were born – an homage to the 1986 Boston Celtics, commonly referred to as ‘the 86 C’s.’ Nick performs with a number of collaborators but often and astonishingly recreates the soundscapes via his guitar, synth and loop pedals. The urge to experiment with different iterations of his material has only grown in time. According to Stevens, “I try to do things that will surprise myself and the audience.”

The Eighty Six Seas debut EP, This Is Just a Simple Song, offers a looking glass for anyone seeking to make sense of these most turbulent times in their lives and how to adjust accordingly.