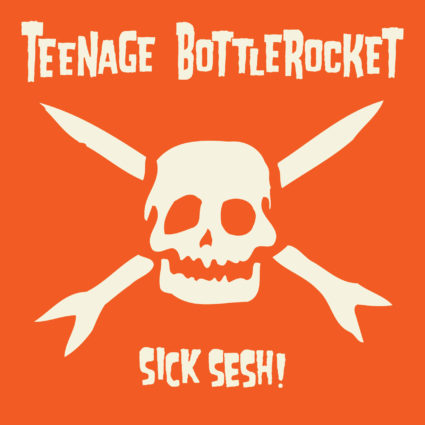 They’ve toured the world countless times. They kept the leather jacket-and-Converse look alive through an increasingly neon landscape. They’ve written songs about KISS, Top Gun and Minecraft. Hell, they’ve even been on CNN a few times! So please welcome back to the spotlight Wyoming’s own Teenage Bottlerocket, whose ninth album, the 12-track Sick Sesh! — traffic-cone-orange cover art and all — will be released August 27th on Fat Wreck Chords. “This record is 12 songs because 14 was too long,” cracks vocalist/guitarist Ray Carlisle. “We wanna keep the energy up.”

Recorded in November 2020 at the Blasting Room (the band’s eighth straight full-length with producer Andrew Berlin), Sick Sesh! is a little bit rougher around the edges than the last few TBR albums, from the haunting “Statistic” to the panic-inducing “Strung Out On Stress” to the buzzsaw lead of “Semi Truck.” According to Carlisle, that was on purpose.

“We spent a lot of time on guitar tones this time around — that was important for us,” he says. “We made sure to bring the noisy, loud, irritate your f*ckin’ mom guitar back. There’s a ton of intentional guitar noise and feedback. We dug up the amps we used for Freak Out! and They Came From The Shadows. This is punk rock, after all. Stay Rad! Is a great record, but it’s very radio-friendly. I wanted to do the opposite of that: Let’s get f*ckin’ noisy.”

While the bulk of Sick Sesh! was written in January 2020 (with “Statistic” actually co-written between Carlisle and his son Milo), the COVID pandemic allowed for the band to take a little extra time for fine-tuning, and the resulting tracks are some of the most stylistically diverse on the record. First up, there’s the Templeman-penned “Strung Out On Stress,” the fastest, angriest track on Sick Sesh!, all about losing your mind during the pandemic. On the flip side, there’s the mid-tempo, melodic track “The Squirrel,” written by bassist Miguel Chen and sung by Templeman, that’s literally about a cute little rodent.

“He had too much time on his hands during the pandemic,” Carlisle jokes. “How did it become a Teenage Bottlerocket song? I’m not sure. But it has the best guitar lead we’ve ever written!”

Chen also wrote the infectious sing-along “Ghost Story” and the album-closing “Moving On,” which marks the first time Carlisle has ever sung Chen’s lyrics on a Teenage Bottlerocket album. The song, about the bassist’s decision to move from his hometown of Laramie, Wyoming, to Texas to be with his ailing father, demonstrates a new side of Teenage Bottlerocket that’s reflective, wistful, and dare we say a little mature. (“It felt good to sing that one,” says Carlisle.)

With more than 100 original songs already in their catalog, how does the band stay motivated when they’re eight records deep? “We’re always in competition with ourselves,” Carlisle explains. “The real competition is between me and Kody. It’s like, ‘You wrote a song that destroys everything else on this record. Let me try to do that to you real quick. How’s that feel?” And then he comes back and one-ups me. “It’s all about the songs,” he continues. “The songs carry this record all the way. That’s not to say there are bad songs on our other records — we have a hard time releasing a sh*tty song. But these songs are especially great. You know ALL’s best-of record where Allroy is dissecting a musical note? I felt we kind of tapped into that record in a great way, not in a ‘Oh no, they’re experimental now!’ way. This is a Teenage Bottlerocket record through and through, but there’s a lot of hidden elements.”

Carlisle’s pride about Sick Sesh! is obvious, but he’s not the only one who loves the album. “Fat Mike called me and said, ‘Hey, this is your best record,” Carlisle recalls. “I said, ‘Cool, thanks for noticing.’” With Sick Sesh! ready to drop, Teenage Bottlerocket will return to the road once more throughout 2021 and beyond, and you can expect to hear plenty of new tracks peppered into their already high-energy sets. Given that the band is already two decades old, is there any chance of the band slowing down? Carlisle shoots that idea down right away.

“I want to have the best next 10 years,” the singer says. “We’ve grinded the grind. Now we get to actually enjoy being a band, and not think too much about different ways to try and ‘make it.’ We’re riding this wave we built ourselves. I wanna surf it for another 10 years.” Well, there you have it: The three things in life can always count on our death, taxes, and Teenage Bottlerocket. But before Carlisle signs off, he has a question for all the fans out there,

“What’s your favorite Teenage Bottlerocket song?” he asks. “Bzzt! Wrong answer. It’s on this record, you just haven’t heard it yet.”