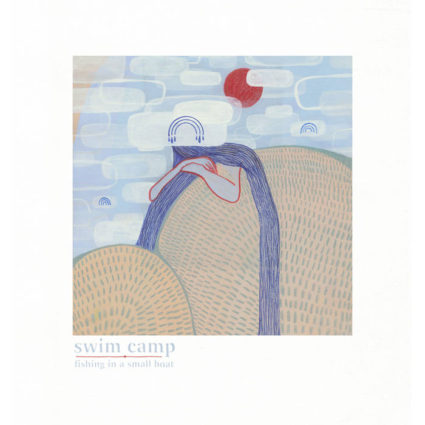 “a gorgeous dose of lo-fi slowcore/folk that recalls anything from legends like the late Jason Molina to newer acts like Alex G.” – BrooklynVegan

“Tom Morris makes a slowcore song sound like an anthem.” – The Alternative

“Swim Camp’s music always makes me want to be holding a cup of hot coffee under a blanket while I watch the rain, and this song is no exception to that cozy feeling that Tom Morris’s guitar tones and voice always has.” – Philth Zine

Tom Morris began recording music under the moniker Swim Camp in 2015. New to guitar and songwriting, he channeled his energy into simple, evocative chords and personal lyrics, resulting in his own brand of lo-fi indie. Six years, numerous soundcloud-only EP’s, and two albums later, Morris delivers his most fully-realized work yet with Fishing in a Small Boat. The record is a testament to Morris’ journey and musical process. Written over the course of two years, the record evinces deliberate focus and offers a delicate investigation of the fault lines of personal relationships.

Molded by Philadelphia’s thriving diy music community, Fishing in a Small Boat is a call to introspection; it is the sound of a man searching for himself in others. Morris’ yearning compositions pull from his roots as a trained Jazz drummer. The album itself is woven with bold strokes of improvisation and spontaneity. This approach lends the tracks a transparent authenticity felt most keenly on songs like “A Different Kind of Sleep”. Unable to keep the melody out of his mind, Morris sketched out “A Different Kind of Sleep” on Headroom Studios’ piano during a break while working on another project. He quickly fleshed the song out and recorded it on the spot with longtime producer, Mark Watter. The effect is gravitational; the listener finds themselves pulled along on Morris’s own wave of earworm melodies and aching nostalgia.

Intuitive and honest, Fishing in a Small Boat shines amid a constellation of experimental peers and influences for Morris (notably Alex G, LVL UP, Spirit of the Beehive). Morris calls out to listeners and fellow artists on their own path to self-discovery with a steady, enduring exhortation: “when everything is fu*ked, you know you can’t give up”.