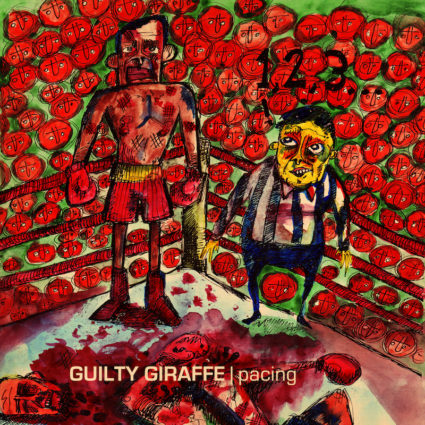 “Fractured and discordant, yet fresh and familiar. That’s the sound of Yonkers, New York’s Guilty Giraffe. A touch of classic Swirlies adventurism, early DIIV guitar sparkle, and MBV guitar overdrive, all mashed together into a compelling whole.” – DKFM

“Yonkers quartet makes their love of effects pedals well-known, quickly pivoting from a shoegazing overture to dream-pop arpeggios; this dynamic blend of sounds dark and bright” – The Deli Magazine

“the 90s touch is strong in this one. As a millennial myself, there’s nothing I love more than having my heartstrings pulled with some good old fashioned Clinton-era vibes. Guilty Giraffe are on the cusp of something great and delightful”– Dental Records Music News

“Let’s get this out of the way now. They have the reputation of being loud. Very loud..… I could have used two sets of earplugs. What they also did at that show was impress the hell out of everyone in attendance, the other bands included.” – You Don’t Know Jersey

Guilty Giraffe are a band hailing from Yonkers, NY, blending genres such as punk, grunge, shoegaze, and metal into one big melting pot of controlled chaos. The band has been playing around the NY, NJ area for almost 5 years now consistently. Guitarist/vocalist Mathew McGinnis introduces lush and powerful layers of guitars and the band used to be considered one of the loudest bands in NY. However Guilty Giraffe’s lineup on newer more polished recordings of the band include new members Will Vellek on guitar, Shane Sumano on bass, and Kevin Knebel on drums and it brings a new mellow shoegaze vibe to the project at some points up against grungy metal breakdowns.

The newest album Pacing offers up a few years of pent up quarantine aggression, punk rock angst and lulls of lush My Bloody Valentine-ish quiet to loud dynamics.

The new album Pacing offers a continuation of sounds the band has explored in the past, noisey interludes, thick walls of sound, psychedelic riffs, and heavy breakdowns. This band will be sure to catch the ears of listeners who like No Age, A Place to Bury Strangers, Cloud Nothings, Fugazi, Metz, and The Deftones. Recently finally out and about in the Tri-State area audiences are soaking in the intense performances of Guilty Giraffe once again and enjoying having their faces melted with a mix of catchy to downright dirty indie rock.