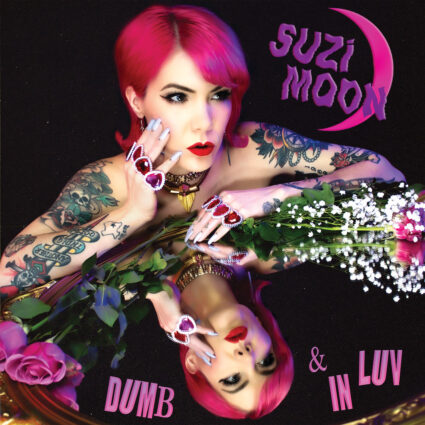 After the incredible response to her first two EPs on Pirates Press Records we are thrilled to be releasing the much-anticipated full-length by Suzi Moon! Originally from Southern California, but relocated to Washington DC, Moon and her band have put together an incredible debut album that is well worth the wait!

Recorded and produced by Davey Warsop (Sharp/Shock, Suedehead) they are an eclectic set of catchy as f*** songs that they’ll be playing worldwide for the last half of 2022.

Dumb & In Luv was actually written and mostly recorded before the release of her EPs – but she wanted to spend more time working on it to be able to present to you this cohesive collection of songs. When asked about the album, Moon says “These songs are a bit warmer and power-pop than my previous releases. They’ve been baked in the California sunshine, like the song “99 Miles To Pasadena,” which I wrote while running laps around the Rose Bowl. I picked songs that fit together nicely but also offer a lot of variation, so you’re getting more of a full ride with this album than you did with the EPs!”

She continues, “The ten tracks on Dumb & In Luv represent growth and the human condition. Themes of love, loss, heartache, hope, and celebration are all ones that I have written about before and will certainly revisit again and again. My first EP, Call The Shots, had a straightforward punk n’ roll sound, my second EP, Animal, was a bit more melodic, and Dumb & In Luv is really a mix of those two styles, seeped in the influence of all those great California bands that influenced me while I was growing up, like Social Distortion, Rancid, Green Day, and Sugarcult.”

The band will be playing throughout Europe (including Xtreme Fest and Rebellion), playing a slew of record release shows with Teenage Bottlerocket, Punk in the Park, Punk in Drublic, and a U.S. tour supporting The Dead Boys and The Briefs in October. We can’t wait to see what 2023 will bring for the unstoppable force that is Suzi Moon!