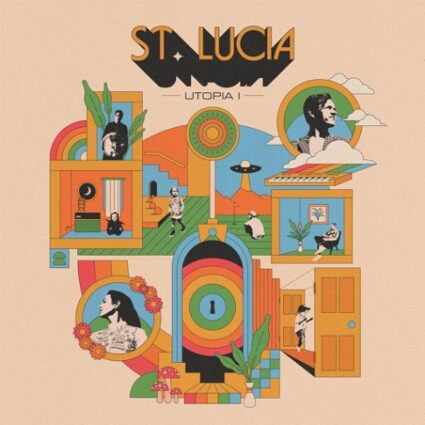 “a welcome return to the dance floor with a vibrant animated video bringing its stargazing lyrics to life.” – FLOOD Magazine

“An invisible disco ball hovers over St. Lucia…the power couple with the curated ear for nostalgia. German born Patti Beranek and South African Jean Phillip Grobler give us a reason to dance with this month’s ‘Rocket on My Feet’…the single following a slew of successful releases. With a distinct palette of synths, their repertoire pulsates with vibrant sonics characteristically defining the duo.” – Ladygunn

“St. Lucia returns with an optimism pulsating through their soundscapes with endless energy that makes dancing seem effortless.” – Unpublished Zine

“This tune reels you into it a dream world where dancing and casting out negativity are thematic elements found throughout the entire song. Reminiscent of ABBA’s disco-infused tunes from the ’70s, “Rocket On My Feet” begins with a synth-driven beat before launching listeners into an undeniably groovy crescendo of punchy drums, airy vocals, and slick guitar melodies.” – EDM Identity

“The song ‘Rocket On My Feet’ from ‘St. Lucia’ is difficult to categorise into one musical genre. It is somehow a wild mix of early 80s electro pop, early 2000s indietronic and a good pinch of 70s disco. How the hell is that supposed to sound? Well, in any case extremely groovy and danceable.” –Electrozombies

Led by husband-and-wife duo South Africa-born Jean-Philip Grobler and Germany-born Patti Beranek, St. Lucia retreat from a fractured world on fire and into the glow of a rapturous synth-spiked electro-pop catharsis—like a dance party at the edge of existence. Now signed to Nettwerk Records, the group beams out a light of their own and shines brighter than ever. “In a way, this is my personal rebellion against the darkness of the world,” states Jean-Philip. “It’s easy to feel depressed these days, so I’m trying to bring something joyous to the world. I was sick of seeing shit on the Internet, and I just wanted to feel good. That’s what being human is about. We have to feel alive, despite whatever the fuck is going on.”

St. Lucia has always stirred these kinds of emotions. It started with When The Night, which boasted fan favorites like “Elevate,” “All Eyes On You,” and “Closer Than This.”  Its follow-up Matter, yielded the hit “Dancing On Glass,” while the band collaborated with artists ranging from Jack Antonoff to RAC. Two years later, Hyperion represented a creative and critical high watermark with praise fromBillboard, who hailed the album as “buoyant,” and PopMatters who raved, “it feels revelatory.”

“When you listen to this, I hope you feel inspired and like life is worth living,” Jean leaves off. Patti adds, “it unleashes things, and I think we did a good job capturing that.”