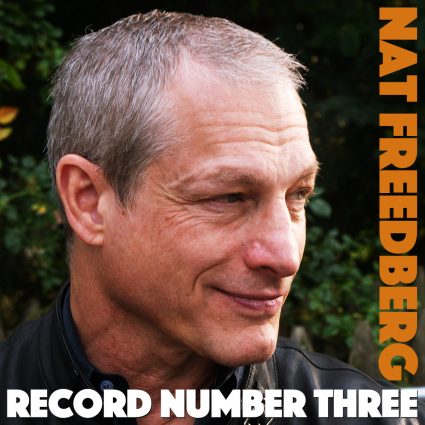 Whether channeling psychedelic rock, guitar-driven blues, or traditional country ballads, everything Nat Freedberg does is about the song. With Record Number Three, Freedberg and Grammy-winning producer Ducky Carlisle take the listener on an auditory journey that covers some diverse territory but hangs together brilliantly.

Though best known for his time fronting the aristo-rock band The Upper Crust (a truly class act which scaled the heights of late-night programming on Late Night with Conan O’Brien and The Late Late Show with Craig Ferguson, releasing a slew of records over a long career), Freedberg approaches his solo work from a genre-agnostic perspective. “I’m a songwriter; I feel like I don’t get to choose what songs I write, their style, or whether they’re serious or funny,” he explains. “They get some personal touches while I’m cleaning them off and making them presentable, but their DNA is from whatever planet they beamed down from. I just uncrate and assemble them.”

Following the dissolution of The Upper Crust in late 2017, it wasn’t long before Freedberg was back in the studio with a batch of new songs that departed from the hard-rock format of the Crust. Chris Cote (Upper Crust bassist) put him in touch with producer and drummer Carlisle; and together with bassist Marc Hickox, and with cameos from some of Boston’s best players, they recorded the 12-song Better Late Than Never (Rum Bar Records, February 2019). Before the dust from those sessions had even settled, Freedberg brought his old co-conspirator Jim Janota (drummer, Upper Crust) back into Carlisle’s Ice Station Zebra studio in Medford, MA, along with guitarist Charles Hansen and bassist Jim Haggerty, and recorded the 10-song Freeloader: The Path of Least Resistance, released in July of the same year.

There are flavors of old-school soul, blues shouts, traditional country ballads and psychedelic rock that weave through this record, but it hangs together as a unified statement bound by three elements: first-class songwriting with memorable lyrical and instrumental hooks, great playing across the board, and a voice that is truly original. It’s worth listening to the music, and it’s worth listening to the words.

Record Number Three serves as a capstone to a period of intense creativity. “For some reason I am channeling music and songs are coming to me,” says Freedberg, “I couldn’t be happier.”