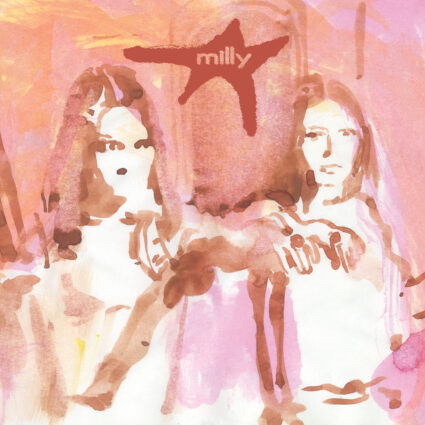 Milly make songs that simmer and spark. The Los Angeles-based band, led by songwriter Brendan Dyer, finds power in the slow burn: their music carries the tension of a lake’s surface moments before a storm hits, or a cracking pane of glass moments before it shatters. Their debut album, Eternal Ring, is kinetic, physical, and often a little bit volatile — a mixture of emo music and 90s-indebted indie that tastes as if it’s been fermenting for years, feeding on itself until it becomes something new entirely. A profound first full-length statement from Dyer and his closest collaborator, bass player Yarden Erez, it’s a record that takes the anxiety of modern-day America and filters it through a prismatic, powerfully individualistic lens, resulting in something intense, bracing, and deeply modern. Using 2021’s Wish Goes On EP as a blueprint, this is Milly with the fat trimmed and the frayed edges cut off. “I feel like Wish Goes On was like, a nice teaser,” Dyer says. “Everything that we’re doing now was there but I feel like we just let it marinate a little longer or something — it feels a lot more focused now.”

To understand Eternal Ring, you have to go back to Dyer’s childhood. Learning guitar and drums from his uncle, a musician, from the age of ten, Dyer was one of the only young people in his rural Connecticut town interested in anything other than sports and other stereotypical markers of American life. Naturally, Dyer began to gravitate towards emo — the closest thing many teens have to outsider art — as an art form he could identify with, bands like Hawthorne Heights subconsciously laying the groundwork for the music he would make as an adult. “It probably only lasted a year or two that I was interested in that sort of thing, but now I feel like it’s become a thing in my life where it’s like, full circle,” he says. “When we were writing this album, and touring before writing this album, I was reconnecting with a lot of the music that I was listening to in my youth and realizing that there was a reason why I liked this music so much.”

Those seeds, though, lay dormant for a long time before they came to fruition. Before Milly, Dyer was the leader of the bright, well-liked garage-pop project Furnsss, a hard-touring act that, at one point, Dyer thought he would play in forever. While on tour with Furnsss in 2016, he began to discover a strain of noisy, anxious dream pop bands, typified by acts like Swirlies and My Bloody Valentine, that he had never delved into before. In the back of his head, he knew that his next project would, in some way, incorporate these influences. “I just had this funny idea — like, when I get home from this trip, I’m gonna start another project and try to wear the different hat, if you will, like, write songs inspired by this new sort of music that I’m getting into now,” he recalls. A year later, while on tour, Furnsss imploded, and Dyer returned to Connecticut; when he arrived home, Milly began.

The Milly of Eternal Ring, though, is a vastly different project from the one Dyer began in his childhood bedroom. Where the band’s old songs were dazed and gorgeously laconic, Eternal Ring is muscular, punchy, almost alarmingly direct. You only need to hear album opener and debut single “Illuminate” to understand the change: slipping quickly from emo balladry into something heavy and intoxicatingly intense, it’s a clear marker that this is the work of a tighter, more dynamic Milly. There is no slack to these songs — even the nine-minute “Stuck In The Middle” is an impossibly taut endurance work, jumping from emotive build to gut-wrenching squall in a second. At other times, as on “Nullify”, Dyer is in full-blown pop mode, the melodic-but-mystifying influence of classic avant-garde indie progenitors like Pavement clear to see. “I feel like we were really trying to hone in on these 90s emo-like influences that we were trying to sprinkle in to the Wish Goes On EP,” he says. “But this time around, it felt more deliberately influential.”

The influence of bands like Pavement and Guided By Voices on Eternal Ring run deeper than just aesthetics. Inspired by the rough-hewn, somewhat miraculous vibe of records like Slanted and Enchanted and Bee Thousand, Dyer chose to approach recording in a way that honored and emphasized initial recordings, resulting in an album with an unfussy immediacy. You can hear this quality in a song like “Marcy”, a track whose frayed edges coalesce into something tight and driving, before unspooling again as the song peters out. This song, and others on the record, are like living, breathing documents of in-the-moment creativity. “We were intentional in keeping a lot of first takes and we’re heavily influenced by the sounds we were getting in that moment and running with it,” Dyer says. “Following our intuition was huge.”

Written during the early days of the pandemic, Eternal Ring often deals with the cataclysmic feeling of modern society — a sense that the world could end tomorrow, or even today. “The themes on this album relate to my fear of death — a lot of it is thinking about other worldliness and pondering what comes next, and trying to make some sense of it,” he says. Songs like “The End”, an ethereal dirge unlike anything else Milly have ever made, speak to these fears. Recalling the apocalyptic dream-rock of former Milly tourmates DIIV and Swervedriver, it’s a standout moment on Eternal Ring — a reckoning with past, present and future that carries the illusory texture of an oil painting. “I’m really close with my parents, and I went a really long time without seeing them, which was really scary to me. When we were recording “The End”, and I was doing the vocal, I would close my eyes and think of home, whatever home meant — it was this weird reaching for comfort to be there for myself, with this sort of lingering fear and chaos.” (continue reading bio on DISCO)