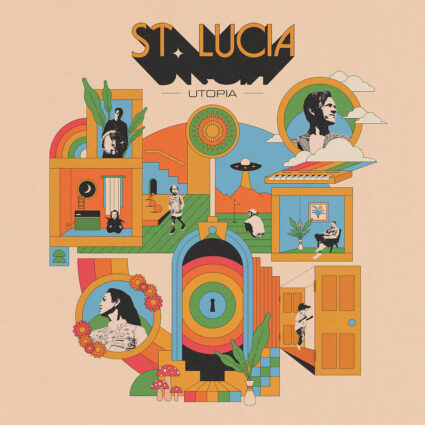 “An instantly-loveable sing-along that’ll have you hitting your best falsetto and striking a pose in the shower.” – Billboard

“The band’s shimmering melodies offer a dose of pure retro-pop euphoria, calling back to classic ‘70s disco records yet casting them in a colorful futurist mold.” – Under The Radar

“A welcome return to the dancefloor” – FLOOD

Led by South Africa-born Jean-Philip Grobler and Germany-born Patti Beranek, St. Lucia has stayed faithful to what they’re best at: putting on incredible live shows everywhere from Coachella to Kansas City, producing shimmery synth-driven pop grooves, and having a good time doing what they love. St. Lucia has always stirred good vibes. It started with their debut album, When The Night, which entered the Billboard Top 200 and hit #6 on Billboard’s Heatseekers Album chart. The follow-up album, Matter, yielded the hit “Dancing On Glass,” while the band collaborated with Jack Antonoff, RAC and others. Two years later, Hyperion represented a creative and critical high watermark with praise from Billboard, who hailed the album as “buoyant,” and PopMatters who raved, “it feels revelatory.”

Throughout 2020, they wrote and recorded what would become Utopia in Patti’s hometown of Konstanz, Germany and Upstate New York. Following the birth of their youngest son Charlie, Jean-Philip’s self-imposed social media exile, and a return to “normalcy” in the world at large, they shared six tracks as Utopia I in April 2022. “Rocket On My Feet” eclipsed 1 million total streams as the project earned critical praise from Riff Magazine, Under The Radar, and more. Variance hailed it as “a wealth of electropop goodness in the middle of a world on fire.”

In its entirety, the forthcoming LP only expands this vision, hinging on the parity at the heart of the band’s signature style. Synths pulsate like strobe lights as euphoria rains down from a skyscraping singalong. The guitar strings shake and shudder akin to bodies on the dancefloor bathed in fluorescence. Freedom courses through every physical and emotional movement as you depart this dimension only to land on St. Lucia’s Utopia. The group’s fourth full-length album unlocks this plane via eloquent and elegant electro-pop projected in cinematic proportions like your favorite fantasy fever dream on the big screen. As the unadulterated and unfiltered vision of Jean-Philip Grobler and Patti Beranek, these 13 tracks engage escape in its purest form.