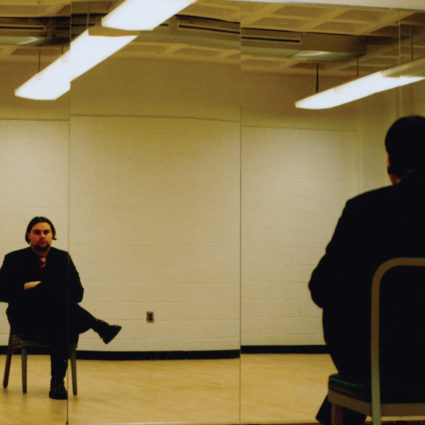 We have all been looking inward during this pandemic-searching within ourselves for meaning in a chaotic and changing world.

In the midst of the global coronavirus pandemic both musician Michael Nestor (Underlined Passages, ex-The Seldon Plan) and producer/engineer Frank Marchand (Bob Mould, Sugar, The Thermals) decided to start talking to each other for the first time in two years, the time since Frank recorded the last Underlined Passages record (Tandi My Dicafi, Mint 400 Records).

As with most conversations that were (and are) happening during this unprecedented time, the discussion began to center on memories about a time when the world was a better place.

Michael was discussing recording a new Underlined Passages record, the band’s first since 2017, when Frank brought up how the world has changed over the past 20 years-and how those changes lead us to where we are now as a world.

Michael and Frank then decided that they would celebrate all the music they have put out into the world over that 20 year time-span with the hopes that they could bring some joy to those stuck at home, or out of a job, or suffering in any way.

Over the past 20 years of working together Frank and Michael, across Michael’s various bands, have recorded 12 records. Each one of those a time capsule to a simpler and more open time. The pandemic gave them both the opportunity to share this music once again.

Painstakingly remixed by Frank Marchand from the original recordings at Waterford Digital and re-mastered by Alan Douches at West West Side Music, this collection of songs shows the breadth and depth of Michael’s songwriting. More importantly, it showcases the talent of his collaborators and collaborative songwriters across four bands.

Because we live in an unprecedented time, Michael is donating 50% of the sales of this retrospective to the American Red Cross for COVID-19 and disaster relief.