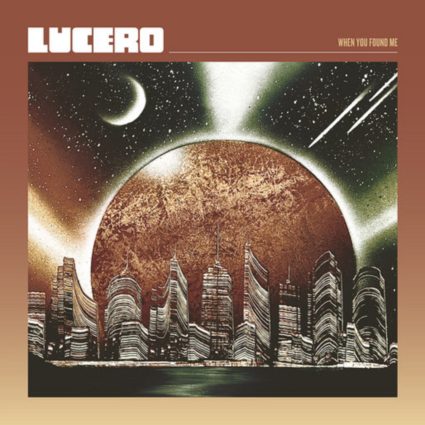 Lucero - When You Found Me

“Far be it from Lucero to miss an opportunity to tell a great story.” – Magnet (“Back in Ohio” Premiere)

“While Lucero had nothing to fix, they still managed to build upon what’s become one of rock music’s strongest foundations…It’s the loving, craftsman-like work of the rare kind of band with enough spirit to fill an arena, but with its heart planted firmly in the garage.” – NPR Music

On When You Found Me Lucero reunites with Grammy Award winner Matt Ross-Spang (Jason Isbell, Margo Price, Drive-by Truckers) who produced their 2018 acclaimed album Among The Ghosts.  When You Found Me was recorded in the band’s hometown of Memphis, TN at the historic Sam Phillips Recording Studio.

When You Found Me finds Lucero founder Ben Nichols lyrically ruminating on family, while the band continues to evolve musically after 20 plus years. When You Found Me finds the group tapping into a more atmospheric widescreen vision, while expanding on their sound with heavier rock sonics. The use of keyboard player Rick Steff’s extensive collection of vintage synthesizers conjures an aural world of classic tracks with a firm foot in the present. Nichols, Steff and bandmates Brian Venable (guitar), Roy Berry (drums) and John C. Stubblefield (bass) uphold the urgency of past Lucero releases, while moving forward in both sound, writing and texture.

The single “Back in Ohio” is a raucous foot stomper, written about the incredulous true story of William Morgan from Ohio, who fought alongside Cuban rebels to help them win the Cuban Revolution.

“I think this one is gonna be a really fun song to play live. The chorus is made to sing along to… especially at the Ohio shows.” – Ben Nichols

Lyric video below by Ben Nichols