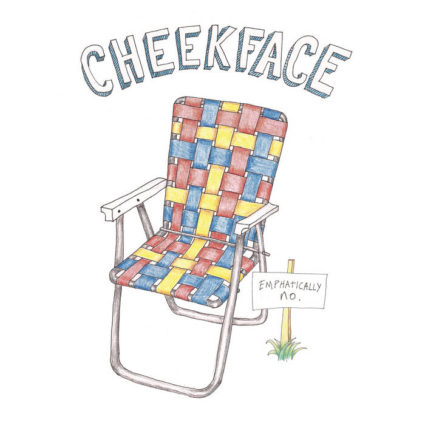 “Cheekface’s gift for combining the mundane and the dystopian together will always remain a delight.” – Beats Per Minute

“That mix of familiar comforts with a brand of humor so distinctly current it hurts, makes for essential listening.” – Paste

“At no point, though, does it not sound distinctly like a Cheekface record—the staccato, upbeat instrumentation, even without Katz’s unmistakable conversational tone, could belong to no one else.” – Flood

“Katz is the best kind of wise-ass: deadpan, self-effacing, quick and economic with his words.” – Buzzbands LA

“Guitarist/singer Greg Katz half-sings, half-speaks in an almost monotone voice, his deadpan delivery amplifying the humor of the lyrics, which encapsulate the spirit of the album: quirky comedy, rejection of conventional wisdom, and defiance, sometimes for its own sake.” – Audiofemme

“It’s an eerily prescient dispatch of a band trying to maintain sanity amidst total political and social fallout.” – Merry Go Round

Here comes Cheekface‘s Emphatically No. It’s the second full-length album from the Los Angeles indie rock trio of guitarist/singing person Greg Katz, bassist/other singing person Amanda Tannen and drummer Mark “Echo” Edwards. This is a record obviously influenced by great American talk-singers like Lou Reed, Jonathan Richman and Stephen Malkmus, British post-punk bands like Wire and The Fall, and proto-indie bands like The dB’s and Minutemen. However, Cheekface chart their own course with their humorous, self-effacing, and openhearted lyrics that set the mundanity of daily life against the backdrop of our catastrophic world, as in the memorable “Best Life,” which starts with the band mumbling “Everything is normal,” before Katz blurts out, “Due to personal reasons, I said nothing in therapy / we just laughed and laughed and laughed and laughed and laughed!” (continue reading full bio in downloads folder)