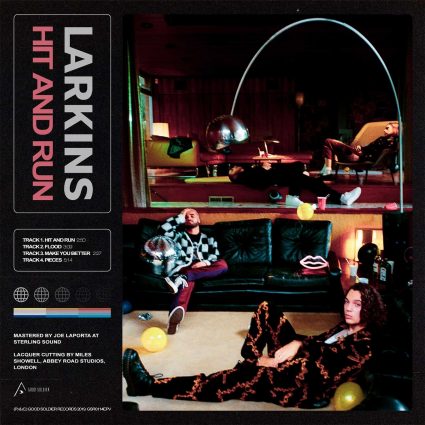 “A sound located between Tears For Fears, The Wombats and The 1975.” – Sunday Times Culture

“Anthemic choruses and heartfelt lyricisms.” – The Line of Best Fit

Hotly-tippled in the UK by Jack Saunders at BBC Radio 1, BBC Introducing and Radio X, Larkins have already earned significant U.S. radio support from KROQ Los Angeles, Aaron Axelsen at The New ALT, Zane Lowe at Beats 1 and Jeff Regan at Alt Nation.  They’ve garnered strong Spotify and Apple editorial support with adds to The Indie List, The New Alt, Indie Party, Transistor, Breaking Alternative and The Bright Side.  Last year saw Larkins sell-out Manchester’s Albert Hall, they also played the Reading and Leeds Festivals, before completing an expansive 30-date headline UK and Ireland tour, where they sold over 4000 tickets. Following the incredible response, Larkins began 2020 by announcing their biggest ever UK shows including Heaven (1100 cap) in London and Manchester Academy 1 (2600 cap). This will see the band become the first band in over 50 years to sell-out the Manchester Academy before releasing their debut album.

Now Larkins take their next leap forward by sharing the new single ‘Hit and Run’. Already a fan favourite having independently released an early version of it, the song is also a highlight of their live shows. Now possessing a swaggering new confidence, ‘Hit and Run’ is a bigger, global-facing prospect. Its immediately insistent vocal hook captures your attention, their synths and guitars duel is punchier than ever, and the thunderous groove amplifies its undeniable energy.

Larkins’ frontman Josh Noble commented, “I remember hearing someone say that you have to approach older songs as the band you are now, not as the band you were when you wrote them. So to release a reworked version of ‘Hit & Run’ feels so good.”