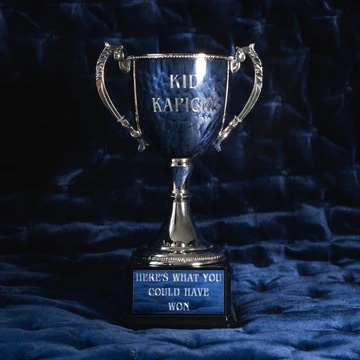 Kid Kapichi - Here's What You Could Have Won

It’s Kapee-chee. It’s Ben Beetham (guitars, vocals, musical director), Eddie Lewis (bass, socials, art direction), George Macdonald (drums, production) and Jack Wilson (vocals, guitars, lyrics, driving, managing). Four twentysomethings with big personalities from Hastings who’ve been making music together for over half their lives, in various configurations. Working in pubs, construction, motorcycle trade, anything. Driving nightshifts just to keep playing. Eight years of non-stop graft. “The bands that make it are the ones that don’t give up,” says Eddie. “We’ve sacrificed everything. Normal jobs, settling down, we put our lives completely on hold for our dreams.”

And the four have dreamed up something special as Kid Kapichi. A behemoth of a band on and off stage thanks to the Hastings scene that nurtured them, until they got their big break from Frank Carter – he invited them to play his birthday party then join him on a major tour. Their best songs explore racism, in-work poverty, mental health, violence, frustration and all-consuming love with honesty and humour. All their songs come studded with barbed wire hooks, bristling with the juddering shock of lived experience, the cathartic thrill of a balled-up fist relaxing into an air punch.

After putting out debut album This Time Next Year independently in 2021, the band recently signed their first proper deal for follow-up Here’s What You Could Have Won. Deserved reward for all that graft. These 11 new songs are an excellent showcase for the band’s bigger, punchier, ‘beat punk’ sound, produced with Dom Craik from Nothing But Thieves.

Comeback single New England is their most explicitly political song yet, with a searing guest verse from Bob Vylan. It’s a brutal dissection of the xenophobic Little England mentality, praised by Liam Gallagher. Liam then asked the band to support him at London’s Royal Albert Hall after he heard their Partygate polemic Party At No. 10. It’s the song they tried to busk outside the nation’s most infamous rave venue – before being dissuaded by Downing Street’s armed police. That won’t stop Kid Kapichi for long, though, as they’re touring the new album around the UK and Europe well into next year. Get involved.