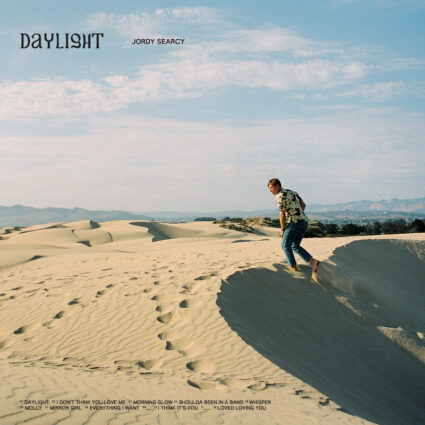 Jordy Searcy is a Louisiana born, Nashville sharpened singer/songwriter, known across the country for jaw-dropping lyrics, stunning vocals, and intricate guitar work – all packaged in intimate authenticity and approachable hooks & production. With over 700 shows under his belt, over 1,000 songs written including cuts & co-writes with arena-sized artists, an appearance on The Voice, and over 51 million streams on his own music, Jordy has made quite the mark for an artist with only two album releases.

In February 2020, one month before the world shut down, Jordy released “Love? Songs” – his debut full-length album packed with the lyrical and emotional depth of Randy Newman and the pop mastery and ingenuity of Olivia Rodrigo. Shows in major markets were selling out, and a promising album cycle was about to bloom.

Then, as we know, the entertainment and touring industry came to a halt. Jordy responded in the only way he knew how, by converting his touring van into his home, and driving down the California coast from Oregon to San Diego to surf and write a new album.

Three hundred and eighty-seven songs later, the resulting record Daylight is his most exciting, mature, and adventurous work to date-with influences like Paul Simon, Pinegrove, Taylor Swift’s Folklore album, and Phoebe Bridgers. The album maintains a theme of gleaming goodness from hard situations. “This is the hardest I’ve ever worked on an album. I think this really is the record I’ve been trying to make since l first started writing songs, and I believe in these songs so much.”

Daylight will be out one song at a time, releasing in full on 6/24 accompanied by incredible live shows in most major markets. For Jordy, things seem to only look brighter from here.