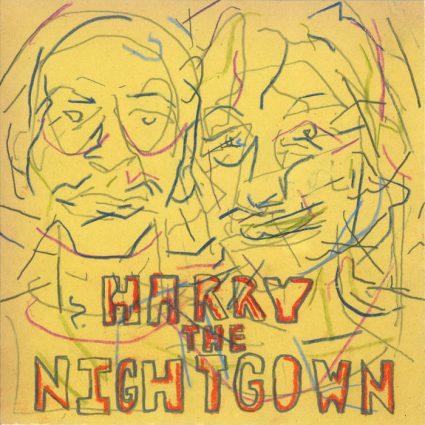 “coasts somewhere between the sensual and the cosmic” – WEEK IN POP

“a catchy and playful slice of avant-rock” – POST-TRASH

“the best use of dissonance in indie rock since They Might Be Giants’ “Ana Ng.” ” – BUZZABANDS LA

Meet Harry the Nightgown, a brand new, Los Angeles based band from Spencer Hartling and Sami Perez that combines studio experimentation with hook filled no-wave.  Today we are sharing the new single and video for “Babbling”, premiering at Week in Pop, who described it as “a glamorous ballad that recalls the sacred and privy nature of intimate interludes”. Building over pulsing basslines and picked out guitar, Sami Perez delicately expounds on the fantasy of addictive love. Stabs of effected synthesizers punctuate the track before the rhythm section drops in, climaxing in a Broadcast-esque jam.

On the albums driving lead single, “Ping Pong”, the band expand a Parquet Courts-esque groove into a harmony laden, art-rock excursion. It’s only the tip of the iceberg when it comes to the full album, which operates as a sort of playground for the duo’s impressive production chops (they’re both engineers at Tiny Telephone Studios). It’s also the first new project from Perez, who cut her teeth playing in The She’s before joining Cherry Glazerr on bass.

At the age of five, Sami Perez was lonely enough to befriend a tree that sat kidi-corner to San Francisco’s Alamo Square Park and directly below her bedroom window. Due to its ever growing ivy, she named the tree “Harry the Nightgown”. Six years later, Perez began playing shows in San Francisco with her band, The She’s. The quartet formed in middle school with hopes of becoming the next ‘Donnas’. The She’s recorded their debut LP at Women’s Audio Mission (WAM), an SF based non-profit that trains women/gender non-conforming (GNC) audio engineers. From there, Perez continued to hone her engineering skills at WAM, which eventually landed her a job at Tiny Telephone Studios, where she delved deep into abstract styles of music production in Tiny Telephone’s exclusively analog environment.

In 2014, Perez met Spencer Hartling at a dive bar in Ventura when their respective bands played to a small audience of balding drunks. Impressed with each others’ performances, they forged a long distance friendship and began to collaborate on their music. In 2017, Hartling moved from Los Angeles to a farm on an off-grid plot of land in the mountains of Guerneville. Hartling set up a minimal recording space in a shipping container, and it was there, against the farm’s backdrop of manzanita trees and natural springs that Perez and Hartling began writing and demoing what would eventually become Harry the Nightgown.