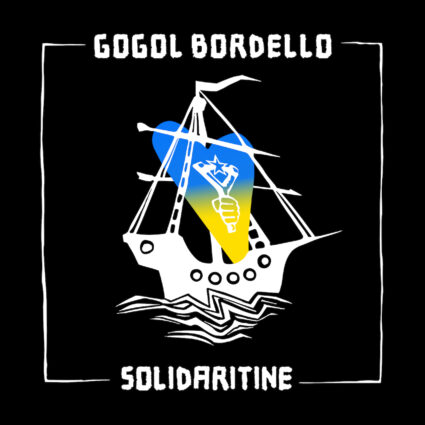 “There’s the excitement of so many unique players swinging in and out of musical view like pirates whipping the ship within inches of its capsize but only by the strength of the songs does it keep from tipping over.”  – Producer Walter Schreifels (Gorilla Biscuits, Quicksand, Rival Schools)

Produced by New York underground punk icon Walter Schreifels (Gorilla Biscuits, Quicksand, Rival Schools), SOLIDARITINE is an inimitable patchwork of punk, gypsy, dub, folk, Latin swing, and Eastern European magic.  “There’s the excitement of so many unique players swinging in and out of musical view like pirates whipping the ship within inches of its capsize but only by the strength of the songs does it keep from tipping over,” says Schreifels about producing the record. “Every song on this record has its central lyrical point to make, backed with passion, intelligence, and an unyielding sense of fun that pairs effortlessly with the music. Despite the amount of care and attention to detail, the key to a great Gogol Bordello song is its sense of joy and natural occurrence, as if it had just appeared out of the ether. “

With the more hardcore leanings of SOLIDARITINE, the sense of urgency and a fresh bolt of energy returns the band to their incendiary beginnings while keeping their agit prop leanings front and center. The opening track “Shot of Solidaritine” kicks off acoustically before launching into a raucous sprint at a breakneck pace. Gogol takes the post-hardcore classic “Blueprint” by Fugazi and injects their trademark Eastern European stomp. H.R. of Bad Brains guested on “The Era of the End of Eras,” blessing the track with a cameo punctuated by a key moment from the Bad Brains anthem “Sailin’ On.” He smiles, “Walter and I were in tears when H.R. sent it in.”

Formed in 1999, Gogol Bordello took their style of Eastern European-influenced gypsy punk and doused it deep into the underground rock of New York City. Imminently beginning a U.S. tour (contact us with any requests), Gogol Bordello have been praised for their recorded material but especially heaped with accolades about their live shows. Wall Street Journal raved about the band’s live performance saying, “Gogol Bordello mashed punk energy with Eastern European modes for a set that received the wildest reception of any show I saw,” while Los Angeles Times said, “Gogol Bordello celebrates sensuality in both words and raucous, joyful internationalist dance rock.” Pitchfork proclaimed, “Eugene Hutz and his acoustic guitar slapping (think Les Claypool’s hands, but on a six-string) and waving arms summoned the crowd which quadrupled in size by the set’s fourth song. Festival goers were literally running toward the stage” while Consequence hailed “the ever-evolving collective has defied the boundaries of continents and genres in their quest for spiritual illumination through gypsy punk.”