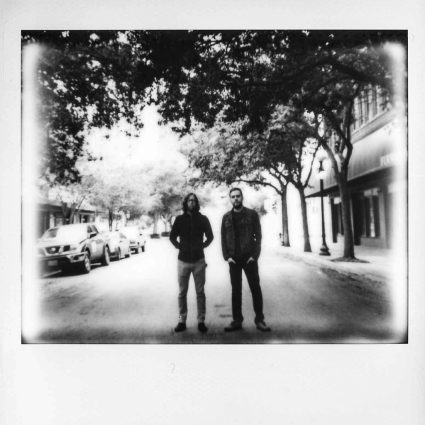 Ghost Parliament’s debut release, SOS (EP), is a collection of 5 songs recorded in isolation during the lockdown. Jordan Essary (drums) and Bobby T. Lewis (guitar) first met at Texas A&M University in Corpus Christi, TX. “I tell people we met in college, and then I always follow up with, ‘Yea, Jordan was one of my first students,’ which is hilarious. I was teaching filmmaking at the time.”

Working on the EP Mighty Was Your Light (Santa Rosa Records, 2020), Bobby asked Jordan to sit in on drums during a rehearsal session. “I was trying to wrap my head around the sound I was going for and thought having a drummer would give me clarity. The session didn’t really gel, but I asked Jordan if he’d like to jam before we packed up. The next thing you know, several songs were written, and Ghost Parliament was born.” A few weeks later, Bobby moved to Los Angeles, CA and Jordan moved to Ozark, MO.

The duo stayed in touch over the years, and eventually, Bobby accepted a teaching position in Springfield, MO. “It was like the stars aligned, and we picked up right where we left off.”

Making the record was a process of trial and error. “Playing live with Jordan is everything, so surprisingly, recording alone was a challenge for me. I lost count of how many recording workflows I tried — most to no avail. The student became the teacher, Jordan mixed the record, and Chris Hanzsek helped us cross the finish line with his mastering chops.”

The record is a love letter to folks and places left behind. Given that, Ghost Parliament’s first directive is simple: Play it loud.