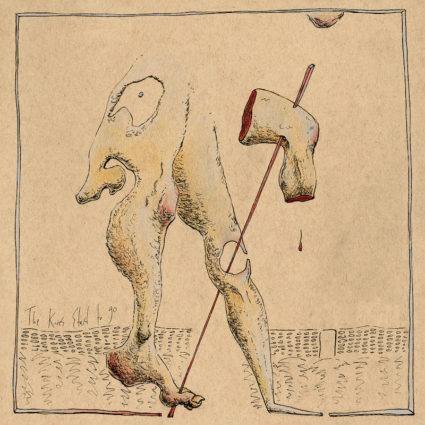 “A standout psychedelic achievement” – Paste, Top 10 Albums of May

“Braindance music to sleep to, it is Cornelius working on a budget in a bedroom suite while Money Mark takes a nap near by.” – Turntable Report

The Knees Start To Go is a combined effort by Flanafi and Ape School. Flanafi is the musical disguise of one Simon Martinez, young guitarist who has played with artists including Jazmine Sullivan, Marsha Ambrosious, Kiefer and Boiled’s own Pulgas. Ape School is the occasional recurrence of Michael Johnson, who has played with Lilys, The War on Drugs, Kurt Vile, Daedelus and Holopaw among others in his now two decade career.

Martinez was a student under Johnson’s university tutelage in the middle part of the 2010s, where they developed a working relationship via many hours in a rotting old studio in downtown Philadelphia. Concentrated studies included: spelunking the value cave of absurdity, creating music while actively removing one’s own brain from the equation, and general explorations in letting one’s instincts dictate direction. Budget Eno on a private school price tag. Paradox eternal which still confuses them both. In the end, these years laid the groundwork for a very natural back and forth this time around.

Flanafi painted the picture while Ape School blurred the edges, producing a work that should baffle and delight in equal measure. An amalgam of synthetic and natural sound: bird calls clashing with ARPs, hiss fighting for room with gnome r&b choruses, carried always by Flanafi’s stunning musicianship and plaintive vocals.