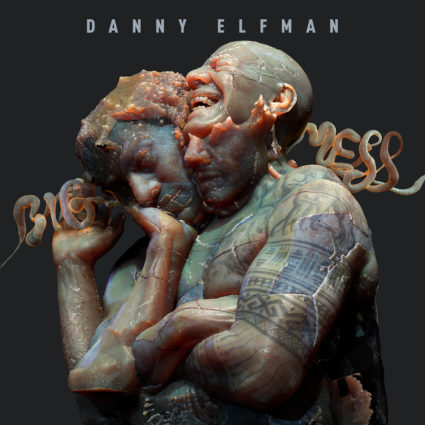 After releasing a series of singles over the past few months, Danny Elfman is announcing his first solo album in thirty-seven years today, titled Big Mess. Multimedia artist Sarah Sitkin created the video for Elfman’s new single release “True”: watch it below.

A slow burning track, “True” faces down hopelessness and despair head on. Elfman’s vocals are gritty and growling here, and his raw unfiltered delivery only adds to the emotionally charged atmosphere. “The video is an exploration of fractured identity, muffled through the lens of memory,” Sitkin revealed. “Danny is a central figure within the video, yet only in his reproduced likeness via prosthetics, masks and 3d printed body parts. I wanted to make a video that was gritty, unpolished and uncomfortable.”

Clocking in at 18 tracks, the sprawling, ambitious double album finds the Grammy and Emmy Award-winning composer breaking bold new ground as both a writer and a performer, drawing on a dystopian palette of distorted electric guitars, industrial synthesizers and orchestra in an effort to exorcise the demons brought about by four years of creeping fascism and civil rot. He is joined on the album by drummer Josh Freese (Devo, Wheezer, The Vandals), bassist Stu Brooks (Dub Trio, Lady Gaga, Lauryn Hill), and guitarists Robin Finck (Nine Inch Nails, Guns N’ Roses) and Nili Brosh (Tony MacAlpine, Paul Gilbert).

Big Mess was almost entirely created spontaneously during quarantine in 2020. It began as an experiment Elfman had been considering which combined aggressive rock band and orchestral strings in a way that had not been heavily explored. “Once I began writing,” he explained, “It was like opening a Pandora’s box and I found I couldn’t stop. None of it was planned. I had no idea how many songs I would write but from the start it quickly became a 2-sided project with heavily contrasting and even conflicting tones.”

The songs on Big Mess combine both harmonically complex arrangements and simple high energy driving music with biting, acerbic wit as they reckon with the chaos and confusion of the modern world. “2020 was an intense year, to say the very least,” Elfman says. And while the anger, frustration, and isolation of it all is palpable in his delivery, Big Mess is about more than simply blowing off steam. In making the space to truly sit with his emotions and write without limitations, Elfman achieved a kind of artistic liberation on the record that had been eluding him for decades, rediscovering his voice and reinventing himself all at once in the process.

Elfman isn’t shy about using that voice to share his mind, either. Big Mess is an often explicitly political record— “Choose Your Side”, “Serious Ground” and “Sorry” all anchor themselves in the political intensity of our times. Even a reworked Oingo Boingo song, “Insects”, transforms itself into a meditation on the greed and sickness of the American ruling class—but Big Mess is also a deeply personal work, with songs like the droning “In Time”, the haunting “We Belong”,  and feverish “Everybody Loves You” revealing more of Danny Elfman than we’ve heard at any stage of his remarkably eclectic career.

“I knew from the start that this wasn’t going to be a neat, easy-to-categorize record,” says Elfman. “It was always destined to be this crazy cacophony, because that’s who I am. The Big Mess is me.”

The album artwork was also created by Sarah Sitkin from a series of 3-D body scans and designed and art directed by Berit Gwendolyn Gilma.

Elfman is also releasing a stunning, limited edition Big Mess box set this fall. This collector’s edition contains the full album along with unreleased remixes and alternate versions of songs. Additionally, the package will include collectable artwork, a unique USB with video content and bonus material, and an exclusive artbook featuring Sarah Sitkin’s original creations and never before seen photos and ephemera.