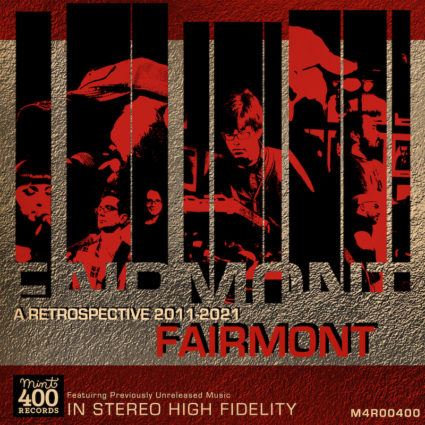 On this newest Retrospective, New Jersey Indie Rock band Fairmont showcase the last 10 years of their 20 year career. It starts with a brand new unreleased track titled “Tomorrow’s Sun” and the album is in chronological order from newest to oldest. Other previously unreleased tracks include a live version of “Little Bird” from the 2017 album A Spring Widow, as well as new mixes of the songs “Strangers” from A Spring Widow and “Elephant” from 2013’s The Grand And Grandiose. We hate to toot our own horn, so we’ll let others do it for us:

“Neil is a one man music industry. With his band Fairmont he takes all the passion he puts into the Mint 400 Records empire and blasts away on music that swallows and channels over 60 years of rock n roll; everything from Beatles 65 to the Front Bottoms S/T. Fairmont we salute you!” – Glenn Morrow | Bar-None Records

“The two words that come to mind about Fairmont are persistence and evolution.  The band has continued to change and grow despite whatever setbacks, personnel changes, or worldwide pandemics get thrown its way, and I’m always looking forward to hearing what comes next”. – Jim Testa | JerseyBeat

“Since the beginning, Fairmont has always had a way of combining familiar-enough songwriting with stripped-down fundamental sounding recordings. Although their sound tends to vary across different albums, they always find a way to equally invoke the big production and hooks of The Shins and Nada Surf as much the sound of early 60’s Beatles and Kinks recordings, and the end result is always songs that feel timeless.” AJ Tobey | Bankrobbermusic, Rough Trade Publishing, Trash Casual Records

“Fairmont makes the kind of quasi-twee indie pop that I wish was being made in more basements across America. Wonderful instrumentation that runs the gamut from math-rock to electro-pop.” – WOUB-AM – Athens, Ohio