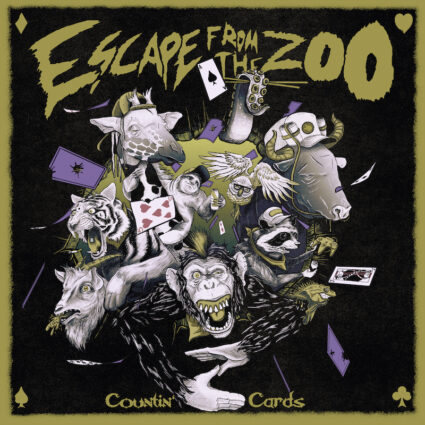 Escape From The Zoo - Countin' Cards

It’s very rare to find music that makes you think, feel and want to mosh simultaneously, but with Countin’ Cards, Escape From The Zoo has struck the perfect balance between all three. It’s something  that the band – the louder, faster, punk project that Days N’ Daze’s Jesse Sendejas co-founded with his wife Veronica – has always done, but never quite to this extent. Much of that is down to the circumstances that led up to the recording of these nine songs – most obviously a global pandemic that allowed for intense self-reflection. That was true for both Sendejas and We The Heathens’ Elliot Lozier, who recorded this album and played bass and drums on it.

“I think both of us were sitting at home with not much to do,” recalls Sendejas. “It was probably a really introspective handful of months for everybody, but we both get stuck in our heads a lot. We get hit hard with waves of solipsism, where it feels like we’re the only people on the planet. That’s a weird and scary feeling, and it forces you to look at yourself because that’s the only thing that feels real at the time. So a lot these songs are Elliot and I sorting through thoughts and feelings and trying to make sense of why we’re having them and what they mean.”

That solipsistic self-awareness coincided with something equally as influential and important for Sendejas – the fact that, on a tour Days N’ Daze went on just before the pandemic hit, he got sober. So not only do these songs offer up deep and poignant existential questions about life – as well as the social and political constructs that surround and consume it – but they’re also a reflection of Sendejas’ newfound clarity and the path he’s now trying to take. (Continue reading bio in download folder)