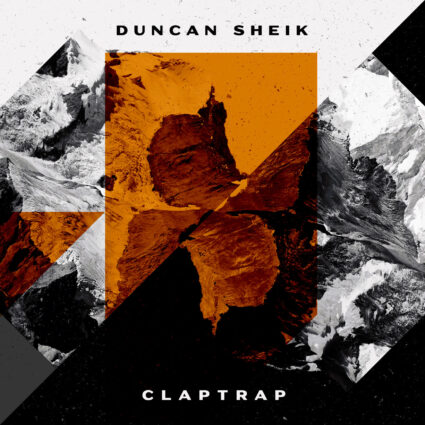 Sheik looks at Claptrap as the latest culmination of his experiences and accomplishments. “Writing for theater broadens the palette of things that you can write about, and ways that you can write,” he says. “I certainly would never have thought to write songs with a serial killer mindset, but doing American Psycho, I was able to do that. And there’s something artistically satisfying about that, but working on a lot of theater projects, one after another, I did have the feeling that I was neglecting the self-reflection that comes from writing a song, as just myself. And there can be something cathartic about that, and something therapeutic.”

These songs were quite literally therapy, salvation. “As the pandemic came into our lives. I was in the middle of a spiritual crisis,” says Duncan Sheik. “I didn’t have any theater homework, because of everything being put on hold, and I wasn’t really up for the idea of making a new Duncan Sheik record.…I just started experimenting—it was very unfocused, and I was almost starting over, learning how to put sounds together in some meaningful way.”

If the concepts he’s addressing seem ambitious and daunting for a pop record, he comes back to what these songs truly meant to him. “Through the recording, and through the deep dive into the ideas and the themes in the lyrics, it really did get me to the other side of some mini crisis, or midlife crisis—call it what you want, but it did help me get through it all. For better or worse, I spent the past two years really earnestly writing this stuff. There was a lot that was rewritten, a lot that was thrown out. So I feel satisfied that what’s here is my best shot at the bull’s-eye for now.”

Duncan Sheik launched his career as a singer/songwriter with a gift for literate pop songs on his 1996 self-titled debut album which featured his chart topping hit “Barely Breathing.” That song racked up 55 consecutive weeks on the Billboard Hot 100 and earned him a Grammy Award® nomination for Best Male Pop Vocal Performance. In the years since, Sheik has been celebrated for his work in musical theater, including the groundbreaking success of Spring Awakening, which won eight Tony Awards and a Grammy and is also the subject of the just released HBO Documentary –‘Spring Awakening: Those You’ve Known.’  Sheik has released eight full-length solo albums which have been praised by both critics and his discerning fans.