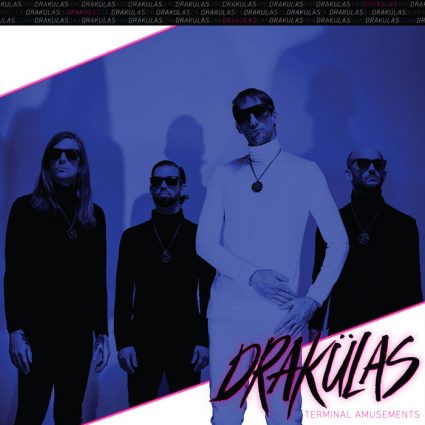 Picture Times Square in the late-‘70s before Giuliani turned it into a Disneyland for tourists. The streets are teeming with back-alley deals, random acts of violence and seedy dive bars. This setting, which shall be known as The City, is the backdrop for Drakulas’ second full-length Terminal Amusements, titled after the illicit video game arcade where we find our protagonist. This isn’t a rock opera exactly, but it is a teenage wasteland.

Produced by Stuart Sikes (The White Stripes, Rocket From The Crypt) and existing in a fictionalized metropolis soundtracked by drugs, pornography, video games, nightclubs, art movements and a little bit of a occult esoterica to spare, Terminal Amusements, musically, evokes everyone from the Dead Boys to The Dickies and recalls a time when punk and new wave skirted a blurred sonic line.

Created by frontman Mike Wiebe (Riverboat Gamblers, High Tension Wires) alongside longtime co-conspirator, guitarist Zach Blair (Rise Against, Hagfish) and a cast of Texas musicians including Rob Marchant, Ian Walling and Mark Ryan, Terminal Amusements is a marriage of proto-punk, garage, 1980’s synth and new wave with lyrical content to match. From the fuzzed-out pop of “Level Up” and the synth-heavy hooks of “Cafe Hiroshima” to the infectious guitar riff on “Fashion Forward,” the album sees the band exploring a wider range of influences this time around while still sounding inherently like Drakulas.