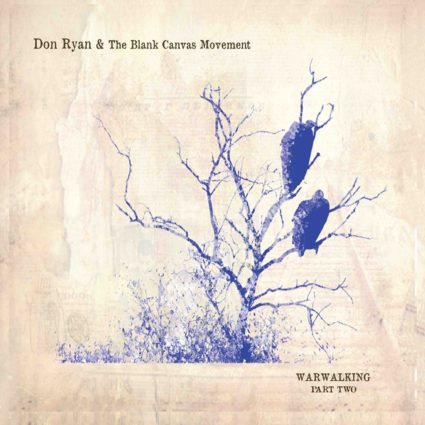 Don Ryan is a singer/songwriter whose compositions are delectable cocktails of ageless beauty and gritty discord — a hypnotizing blend of classic Americana and gypsy jazz with a more modern, psychedelic-folk sound. This is a brand new spin on old music. Ryan’s landscape of jagged sound stands out against the airier tones of the NYC/NJ folk scene in which he thrives; but as dark as his jumbled and oft-foreboding lyrics can be, his melodies are every bit as resonant.

His debut release, Tangle Town, was described by the Aquarian Weekly as a “dark circus” that is “in a word: dazzling”. And while he has been hailed by some as “the next artist ready to carry the torch of Tom Waits to a new generation” (HearHearMusic.com), others have noted his kinship to “the realm of The Civil Wars and Elliott Smith” (Kings of A&R).

Ryan’s aggressive approach to his guitar playing has been noted as an “exercise in fretboard mastery” that is presented “with such an ease and nonchalance that it is easy to miss just how clever and crafty his songwriting chops are” (JimmyLloyd.com). Such command of the instrument was something Ryan learned in his youth. At age twelve, he was taught to play the guitar by a mortician’s son in his town’s local funeral home–sometimes learning with bodies only feet away–an experience that undoubtedly fueled his penchant for the dark and rather eccentric.

Backed by some of the finest musicians hailing from the marshlands of New Jersey, Ryan’s live shows are displays of unbridled intensity, and are every bit the circus one would imagine. Onstage, the man is a dichotomy on two legs. Quick with a joke or a deeply confessional narration, Ryan is equal parts clown and tightrope walker; lion and tamer. But moreover, he is the charismatic master of ceremonies for one thrilling show.

Ryan himself couldn’t be more pleased to announce this new album, his second release with Mint 400 Records, Warwalking Pt. 2, the second installment of what can be loosely called the “Warwalking Trilogy”.

“…the dark circus that Don Ryan brings to life is nothing short of vibrant. In a word: dazzling.” — The Aquarian Weekly

“Don Ryan is the real deal…This is a brand new take on old music, and this young man owns it. Don Ryan’s music blew me away.” — Ear To The Ground