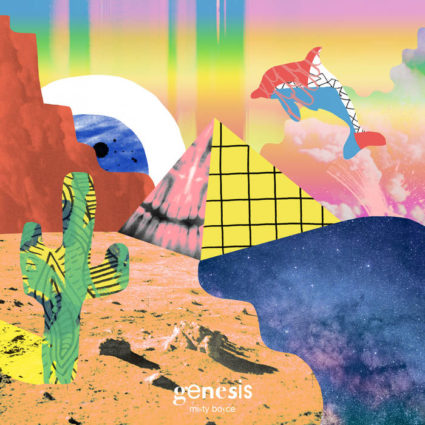 “her work has never sounded this fun or carefree” – BPM

There’s an uncertainty in the moments after a disaster; a tentative hope that the worst is over and a wary fear that you’ve only just reached the eye of the storm. Los Angeles indie-pop artist Misty Boyce’s new album Genesis captures this moment with stark clarity and raw beauty. Throughout its ten tracks, Genesis finds Boyce laid emotionally bare while simultaneously chronicling a society on the precipice of a long overdue shift, exploring mortality, new love, and changing gender & social structures. “There’s been an awakening about the female experience in the world,” says Boyce. “I found myself looking back at my religious upbringing and realizing how much that storytelling informed the way that I move through the world as a woman, and how toxic it is. It’s been really freeing to realize that those were just stories and that I don’t have to live by those archetypes.”

Following the release, Boyce embarked on an extended touring cycle, where playing through her traumas every night informed a decision that her next record was going to be different. “I wanted to make a record that feels good, but also to talk about real shit,” says Boyce. “For better or worse, I wear my heart on my sleeve, and I can’t avoid saying how I feel all the time. It felt natural & right to be honest and bear everything on Get Lost, but I’m happy to share another side of life on Genesis—when you go through something sad or traumatic, you can come out the other side and move on.”

Boyce began writing the songs that would become Genesis in 2018 with producer Jon Joseph [Børns, Kera and the Lesbians, The Technicolors], creating dreamy, atmospheric arrangements that blend folk’s intimate storytelling with lo-fi electronic & hazy psychedelic textures. When it came time to record, Boyce enlisted a rotating group of session musicians as her backing band and invited acclaimed singer-songwriter Doe Paoro and Dawes frontman Taylor Goldsmith to contribute guest vocals to the album.

From the prequel singles released before genesis, Boyce makes her thesis known. “The Clearing” paved way to the album with muted guitars, minimalist percussion and reverb-washed backing vocals supporting Boyce as she reflects on the past and future in the wake of society’s awakening regarding sexual assault and gender inequality. “When I wrote ‘The Clearing,’ the LA wildfires had been really bad, and then were followed by really intense rain,” says Boyce. “It felt very representative of that particular moment. Like, we fucked up as a society, but it’s up to us to rebuild from here and redesign our social structure.”

On the record, Boyce continues to critique the social structures that created this gender inequality in the first place, while also looking forward at a better world we have the opportunity to create. On “genesis (n)one” and “skin,” Boyce invokes the story of Adam and Eve, ruminating on the way women have shouldered the blame for society’s wrongs since creation, and reflecting on how that affects self-image. Elsewhere, “bros” takes aim at Hollywood’s male-dominated storytelling that repeatedly pushes women into auxiliary roles.

Genesis isn’t just a criticism of society’s shortcomings. As the title suggests, it looks towards a rebirth and a new beginning. The grooving, dancey indie-pop track “i do” and the muted vocal ballad “luh u always” celebrate new love, growth and progress that can help heal as we rebuild.

Boyce is aware that rebuilding will be a difficult task, more one-step-forward and two-steps-back, than is ideal, but Genesis bursts with a sense of raw honesty that is sure to inspire hope. “Social rebuilding is always one step forward, two steps back,” says Boyce. “But we just need to take each other’s hands and get dirty and lose control. In losing control, we’ll get stronger together.”