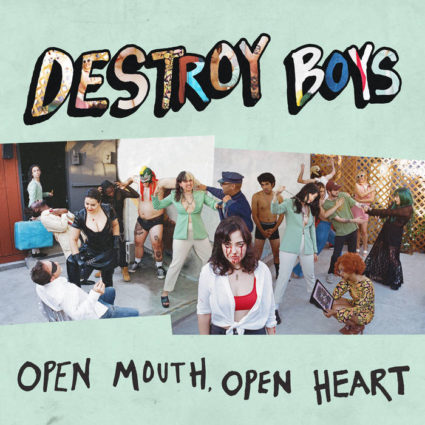 “Using their platform on gender and racial equality as well as LGBTQIA+ rights, Destroy Boys channel that same unbridled passion into their lyrics. The group give a voice to the underrepresented with a fresh perspective on love, loss and everything in between.” – Alternative Press

“California punk rock changed my life. It showed me exactly what I want to do and who I want to be,” says Violet Mayugba, guitarist and singer for San Francisco-based punk band Destroy Boys. At the age of 15, Mayugba and band co-founder Alexia Roditis were going to show after show, becoming a part of the vibrant Sacramento scene. “Vi and I were both like, ‘Let’s start a band!’” says lead vocalist and guitarist Roditis. “I was going to play drums and Vi was going to play guitar. I showed Vi a song I had, I didn’t even actually sing it, it was just a voice memo,” they remember.“ Vi said, ‘No. You’re going to be our singer.’”

The more established artists in the scene were welcoming to the new kids on the block, and the band began to make a name for themselves. Since those early days playing shows in tightly-packed garages and releasing music on their own, Destroy Boys have made waves from the California shoreline to the UK, sharing stages with up and coming bands like Mannequin Pussy as well as punk stalwarts such as Face To Face and Lagwagon. They’ve also racked up over 40 million streams, with the numbers ticking upward every day without fail. And their visceral, personal tales of scene bullies, elitist cliques, betrayal and unrequited love have won over the hearts and ears of eager listeners ranging from the fervent teens who pack out their shows to Green Day’s Billie Joe Armstrong.  Now, Mayugba, Roditis, and drummer Narsai Malik are embarking on a new journey, recently signing a deal with California-based label Hopeless Records.  (Continue reading full bio in download folder)