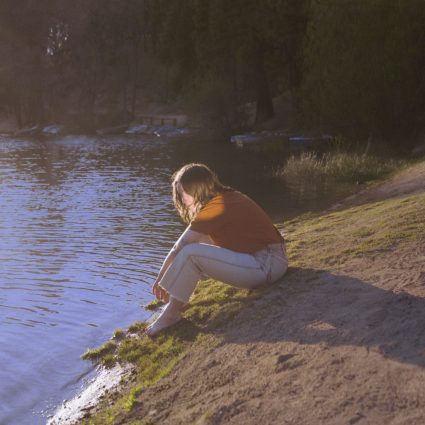 “Her music is defined by its warm tenderness—twangy guitars, cooing vocals, supportive keys—but she doesn’t necessarily want to be your caretaker.” – Paste

Oakland, CA’s Boy Scouts aka Taylor Vick has announced her new album Wayfinder. The follow-up to the acclaimed 2019 album Free Company, Wayfinder has a warm, expansive style that recalls the raw punctures of artists like Lucinda Williams and Alex G with Vick once again showing herself to be a fearless seeker, shedding light on the unanswerable.

The first new song from the record is the wry “That’s Life Honey,” a fantasy of engineering a painless existence that takes inspiration from George Saunders‘ short stories. Directed by Jake Nokovic, watch Taylor take the song out on the water in the track’s new video here

“This song is about trying to make light of a sh*tty situation,” Vick explains. “Having a circumstance that sucks, like wanting to go to therapy but you can’t afford it, and fantasizing about a world where you could get a chip implanted or have some surgery that rewires your brain and resolves you from whatever problems you have. This song is mostly my attempt at writing a tragicomedy, combined with true experiences of figuring out how to open up to people.”

Working once again with longtime collaborator Stephen Steinbrink, Wayfinder was recorded in Anacortes, Washington at The Unknown. Working slowly, they invited a roster of collaborators to join them over time, in person and over email, including Vick’s brother Travis and Jay Som’s Melina Duterte. The effects of working in a new space and with more people can be heard across the bold, assured Wayfinder, which takes place across a wider scale than Vick’s prior work. Strands of slide guitar, organ, and strings ring under her affable, expressive voice, bolstering layers and layers of harmony.

Vick found the title to Wayfinder in Sallie Tisdale’s book Advice for Future Corpses (and Those Who Love Them): A Practical Perspective on Death and Dying. The word prompted her reflection on the ways that music has, throughout her life, illuminated the path ahead. “For my whole life, music has been a crucial part of my identity and how I relate to the world,” Vick says. “The act of making music has been my wayfinder during the past year.”