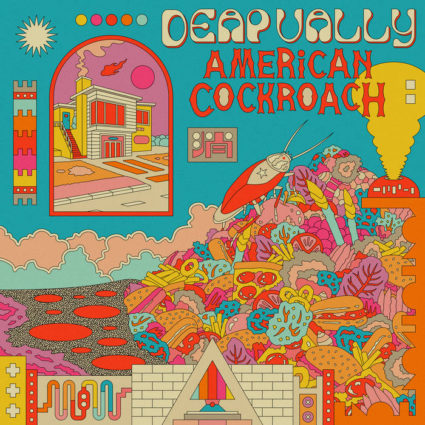 Deap Vally, the Los Angeles-based duo comprising Lindsey Troy and Julie Edwards, have released a new single, I Like Crime, feat. Jennie Vee (Eagles of Death Metal), taken from their upcoming American Cockroach EP, which is due for release on 18th June (Cooking Vinyl). The single, which premiered on BBC 6Music yesterday, is the second to be taken from the new EP, which continues a tradition of collaborations between Deap Vally and other artists that began with their 2020 album collaboration with Flaming Lips as Deap Lips.

Deap Vally say of the collaboration, “Jennie Vee, as it turns out, is our perfect partner in crime. We had so much fun jamming out and then creating this song with her. She is SUCH a total shredder. As the song formed, it ended up being about the nuances of right and wrong, legal and illegal, and the compulsion we all have to ultimately do what we will.”

Says Jennie Vee, “Recording with Julie and Lindsey felt very fresh but natural at the same time. It was the first time I had experienced jumping into the studio to vibe out ideas that would lead to a fully finished song so quickly. Getting started is often the hardest part in the songwriting process, but in this case with the three of us, we just had to show up that day and from there the music took over as our guide. Then it was up to us to piece it all together. ‘I Like Crime’ stands out to me as groovy but urgent, a juxtaposition of mood. It rocks, I had a lot of fun, and would show up for Deap Vally and the music any time!”