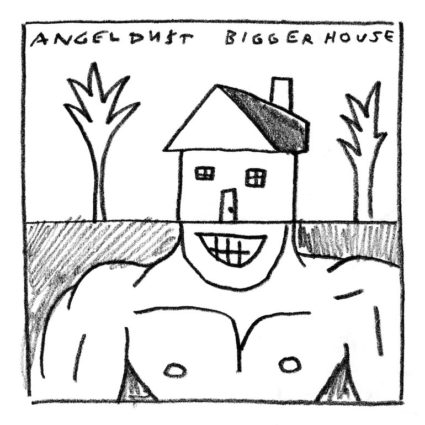 Baltimore, Maryland’s Angel Du$t have released a new EP, BIGGER HOUSE. Available now on all streaming platforms, BIGGER HOUSE features two brand-new singles; “Love Is The Greatest” which Angel Du$t collaborated on with LA based producer / musician Shlohmo, and “All The Way Dumb.” “Love Is The Greatest” arrives alongside an official music video directed by Gene Sungwhich is streaming now on the band’s YouTube channel.

Vocalist / guitarist Justice Tripp commented on the new release sharing, “wrote these songs and they’re pimp and chill at the same time. Rob Schnapf is my uncle now and Shlohmo was kind enough to jump behind the turntables like DJ Lethal for ‘Love Is The Greatest.’ I hope you f*ck it up in the pit.”

This fall Angel Du$t will return to the road alongside Mannequin Pu*sy for a coast-to-coast tour which will kick off September 14thin Chicago, IL. For more information on tickets and tour dates, visit www.angeldustmoney.com/tour.

Breezy but determined as they imbue their laid-back acoustics with sharpness, Angel Du$t continue to prove they are band averse to boundaries. Following the release of LIL HOUSE, STEREOGUM avowed, “These are catchy, peppy, uptempo pop-rock songs… it’s not hard to imagine them ending up in alt-rock radio rotation or soundtracking commercials,” while FLOOD praised the collection’s “breezy, acoustic-guitar-fronted punk.”

Angel Du$t are leaders for the shifting zeitgeist into punk circles. Their Roadrunner Records debut LP, PRETTY BUFF, was produced by Will Yip and features the singles “Big Ass Love,” “Take Away The Pain,” “Bang My Drum,” and “On My Way.” The album earned the band critical acclaim with UPROXX attesting “they somehow managed to pull off a 180-degree sonic overhaul with PRETTY BUFF, stripping back the raw aggression of their previous releases in favor of melodies and strong choruses.” GQ declared, “It’s impossible not to smile and bounce around hearing it, the perfect album for defeating your seasonal depression,” while HIGHSNOBIETY confirmed, “Punk has never been more alive with Angel Du$t tearing up the hardcore scene and continuing to push all of the boundaries.”

Named an “Artist To Watch: 17 Alternative & Indie Breakouts for 2019” by Billboard, Angel Du$t’s “Big Ass Love” was named one of “The 20 Best Rock Songs Right Now” by The FADER who praised the track for its “Fast-paced acoustic guitar chords, speedy vocals, and sunny melodies.” STEREOGUM asserted “Angel Du$t’s ripping hardcore seems to have emerged even more melodic… hurling forward with layers of percussion and a chunking acoustic guitar,” while REVOLVER placed Angel Du$t’s PRETTY BUFF in their “25 Best Albums of 2019” recap.