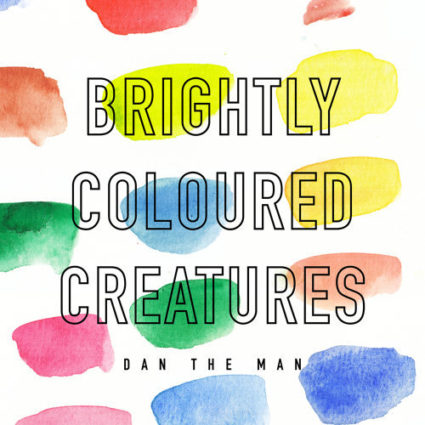 Dan Haggis has been making music with The Wombats for 17 years and has released 4 studio albums with the 5th in the making. Along the way he has done 2 solo albums as Dan The Man – his 2012 self-titled debut followed by 2017’s ‘Circadian Circus‘. Apart from a handful of live shows it’s been mostly a bedroom/studio recording outlet and a place to explore different styles. 2019/2020 saw Dan release an EP, ‘Intergalactic Teacup Travel Centre‘ and debut album ‘Everywhen‘, with Sunship Balloon – a new project consisting of himself and Wombats bandmate Tord Øverland Knudsen.

Dan started playing the piano and acoustic guitar at a young age and began making songs on a 4 track in his bedroom at the age of 14. This is where his love for recording/writing music began. He played acoustic guitar in a folk trio for a few years in his late teens/early 20’s during the early days of The Wombats in Liverpool, but as the band took off in 2007, Dan put his alt-folk solo stuff on the back burner and blazed around the world hammering drums and screeching down a mic. He would often sit up at the front of the tour bus writing solo stuff and whenever he found the time – go into the studio and record them.

Dan’s 3rd solo album, ‘Brightly Coloured Creatures‘, came out on the 8th January 2021. It was written over the last 4 years in locations on the planet such as London, a hotel room in Stuttgart with a bad hangover, Oslo, and a tour bus in Rhode Island. The title was loosely inspired by the studio Ghibli film ‘Spirited Away’, all the brightly coloured creatures and spirits in that film and what they can represent, felt like the inside of Dan’s head, all the different thoughts, feelings and meanings we try to attach to and take from what’s happening internally and externally all the time. The album, as with lots of Dan’s solo work, touches on the passing of time and how we experience it. Other themes include the beauty and danger of nostalgia (Memory Lane), a playful reworking of the ‘long spoons allegory’ (See You In Hell), self-doubt (Fool Like Me), DNA (Unravelling) and a conversation with life (Let Me Down) amongst others.

As with Dan’s other solo albums, he produced and played most of the sounds you hear but Natalie McCool, who also helped finish off the writing of Young Lovers, sang some backing vocals on a few songs. The majority of the album was recorded, co-produced and mixed by good friend and long time collaborator Rob Whiteley (The Night Café, BC Camplight, Lewd Prank, Choco and the Toilet Destroyers) at Whitewood Studios in Liverpool. The first song released from the album, ‘Young Lovers’ (as well as Earthmover), was co-produced and mixed by close friend and longtime collaborator Mark Crew (Bastille, Rag n Bone Man, The Wombats, Katy Perry, Tears for Fears).