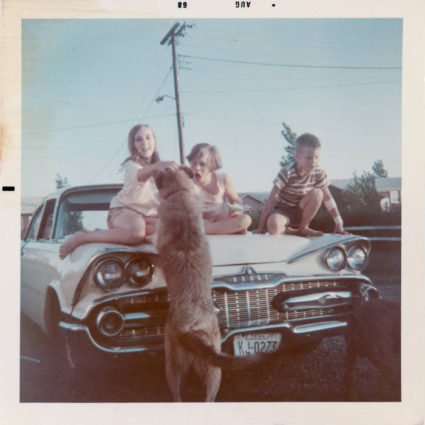 Jessey Clark had his first formative experience with The Beatles while riding a tractor—a John Deere 6155RH tractor, to be exact.

“I was tedding hay in this nice, air conditioned John Deere while listening to Revolver for the first time—and I was getting paid for it!” Clark remembers. “I thought that was about as good as it could get.”

Though Clark’s tedding days are far behind him, stories like this—ones about his family farm outside of Tullahoma, Tennessee—abound when speaking to the vocalist and guitarist today. Some are hilarious (like the time his grandfather chased a rogue tractor down a hill); others are heart-racing (Clark’s father once had to wrangle an angry Spanish bull into a corral); but all speak to the duality that informs the music of Creature Comfort, the five-piece rock band Clark has fronted since 2012.

Over the course of two releases (2013’s Fox Tales and 2016’s Echoes and Relics EP) and a string of singles, Creature Comfort has made a name for themselves by crafting songs that explore what it means to be caught between two worlds: Clark’s modest, rural upbringing back on the farm, and his current life in Nashville, where he’s a retail pharmacist by day and musician by night. As NATIVE writer Luke Wiget wrote about 2016’s “Common John (Southern Shame)”: “The panoramic, self-produced track gets at the heart of who and where Creature Comfort is—stuck between Tullahoma and the city.”

Nowhere has Clark examined this friction better than on Creature Comfort’s upcoming full-length, Home Team. Produced by Drew Vandenberg (Faye Webster, of Montreal, Toro y Moi), Home Team not only finds Clark honing in on what it means to come of age, but it also sees him trying to make sense of an increasingly volatile world. Tracks like “I Won’t Last Forever” and “Darkside” weigh the heavy costs of sacrifice in pursuit of a dream; “Single Soul” lashes out against police brutality and laments what Clark describes as the “constant impending doom” peddled by the media; standout track “Big, Buff, and Handsome” takes on masculinity in an appropriately (and ironically) jocular fashion; and “Black Cat” and lead single “Heartstrings” round out the Home Team with good ole shout-along breakup anthems. They’re the most sophisticated and cutting Creature Comfort songs to date, and they make for an album that feels more mature and cautiously optimistic than the band’s previous releases. To quote Clark, “The ship’s sinking, but ain’t the horizon nice?”

That sense of reserved hopefulness is buoyed by a new sound. Following the departure of former lead guitarist Nick Rose in 2018, the band enlisted multi-instrumentalist/vocalist Alex Robinson and lead guitarist Charlie Hickerson, and the result is a rawer, more rock-forward energy that propels Creature Comfort into new sonic territory without overshadowing Clark’s trademark end-of-the-day vocals or attention to songcraft. The two new members bring something of a push-and-pull dynamic to Creature Comfort: on one end, Robinson’s vocals, keys, and acoustic strumming perfectly complement Clark’s folkier sensibilities; on the other, Hickerson’s squeals, squawks, and slide guitar add just the right amount of aggression (it’s like a jam between composer David Mansfield, the Pixies’ Joey Santiago, and Isaac Brock from Modest Mouse). Add in Jaco Pastorious-indebted bassist Cole Bearden and springy drummer Taylor Cole, and you’ve got a record that the band has affectionately dubbed “bootgaze.” Think of it as Fleet Foxes for people who grew up bailing hay, or your favorite indie record—if that record were scattered, smothered, and covered, of course.