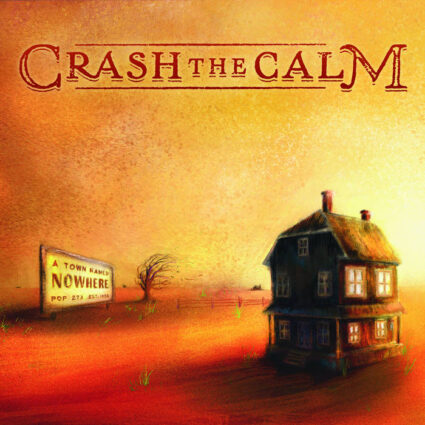 “kind of sounds like a cross between the heavier Manchester Orchestra songs and Balance and Composure. Crash The Calm do a lot of justice to this kind of post-hardcore, and they clearly swing for the fences, with the kinds of soaring hooks and widescreen production that really bring this type of music to life.” –Brooklyn Vegan

“Imagine the brooding, introspective sprawl of millennial classics like Circa Survive’s Juturna or Thrice’s The Alchemy Index crossed with the songcraft and grandeur of The Wall.” –New Noise Magazine

“their most ambitious work to date.” –The Big Takeover

The year is 1930. A candle is lit in church to illuminate the choir’s sheet music. The candle gets knocked over, the church burns to the ground with a woman inside, and along with it a town withers as massive sky-blackening storms threaten to swallow the earth whole. The inhabitants barely hang onto hope, wondering if the God they’ve been praying to has turned its back on them and left them behind… Welcome to A Town Named Nowhere.

On first glance, the Dust Bowl might as well be a galaxy away from 21st-century Long Island, New York. And if this milieu, immortalized in the work of John Steinbeck and Woody Guthrie, seems like an incongruous setting for an album by a band with post-hardcore roots, Crash The Calm is poised to remind us that time and space can only contain the imagination as much as one allows. A Town Named Nowhere, the Long Island quintet’s new full-length album, transports the listener to the drought-stricken Southwest of the 1930s with an all-consuming vividness that rivals the scope of an epic period-piece film or great literary classic.

Pushing far beyond conventional notions of the “concept album” as we know it, Crash The Calm captures timeless, universal struggle—between humankind and nature, between people and each other, between the individual and one’s own conscience, between grief and perseverance—within a musically sumptuous diorama that’s as lavishly constructed as the storyline co-founding guitarists Brian Dowling and Pat Smith scripted to serve as the music’s foundation.

Indeed, with A Town Named Nowhere, Crash The Calm hasn’t merely brought a fictitious town to life, but instead created an entire world out of sound. The insistent, chiming guitars that close-out “Devils,” for example, are as ominous as the visual of church bells ringing out across a desolated landscape. The songs, grouped together into three “chapters” of the story, cover vast musical terrain, from the mournful slow-burn of “The Night St. Catherine’s Fell” to the oddly dour and anthemic “My Nowhere,” to the recurring shout-along chorus of “We all / we all / come from nothing and nowhere” to the brilliant, unexpected twist the band puts on pop-punk at the very end with album closer “Past and Present.”

We are the soulless ghosts, the ones that remain…