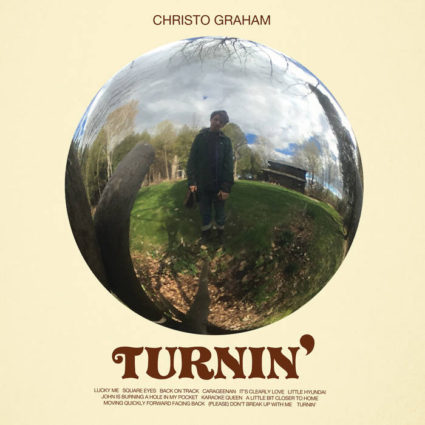 Three years after his November Baby LP, Christo Graham’s follow-up album Turnin’ is a musical u-turn, retracing his steps through the chronology of recording at home, of “moving out”, and coming around to it again. All 12 tracks individually reflect the closeness and the constraint of recording at home.

Last spring Christo Graham brought home a four-track tape recorder that belonged to his grandmother. On an unlabelled reel that accompanied the mystical machine, he uncovered buried treasure — two songs his grandmother recorded years ago singing in four-part harmony with herself. Though Graham had no new songs written before acquiring it, the machine quickly began to turn out songs like chair legs on an industrial lathe and four weeks later he had 12 tracks all inspired in one way or another by this remarkable recorder.

Graham is no stranger to home recording. He began writing and producing his own music at age 13 in his final year of home-schooling in Bishop’s Mills, Ontario. Throughout high school he recorded in his bedroom with a guitar and Casio keyboard, releasing new “Casiocoustic folk” albums every summer. He graduated from Bishop’s University with an Honours Degree in Theatre and a Film Studies Minor, and two more full-length albums.

His latest album Turnin’ as a whole is encapsulated in its title track, which explores the idea of returning to a starting point, however changed. What started as Christo Graham messing around with a four-track tape recorder from his grandmother ended up being a philosophical journey rewound to the beginning. He has returned to his starting point changed.