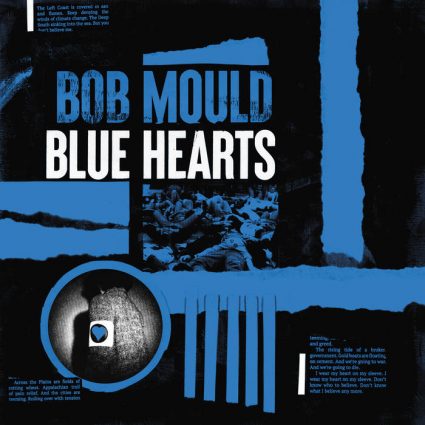 In the winter of 2019, Bob Mould bucked the era’s despair with his most melodic, upbeat album in ages, Sunshine Rock. Cut to spring of 2020, and he has this to say: “We’re really in deep sh*t now.”

To be sure, we were in some sh*t back in 2018, when Mould recorded Sunshine Rock with longtime colleagues Jon Wurster (drums), Jason Narducy (bass), and Beau Sorenson (engineer). Back then, he had a song called “American Crisis” that didn’t fit the album.

“That song is the seed for what we’re talking about now,” Mould says from his home in San Francisco during the COVID-19 lockdown. “At the time, it just seemed too heavy. Today it seems f*cking quaint.”

“American Crisis” is the third song in a walloping first half of an album that spits plainspoken fire at the people who fomented this crisis. “This is the catchiest batch of protest songs I’ve ever written in one sitting,” he says.

Through some of the most direct, confrontational lyrics of his four-decade career, Mould makes his POV clear: “I never thought I’d see this bullsh*t again / To come of age in the ’80s was bad enough / We were marginalized and demonized / I watched a lot of my generation die / Welcome back to American crisis.”

Why “welcome back”? Because Mould experienced deja vu writing Blue Hearts in the fall of 2019. “Where it started to go in my head is back to a spot that I’ve been in before,” he says. “And that was the fall of 1983.”

Back then, Mould was a self-described “22-year-old closeted gay man” touring with the legendary Hüsker Dü and seeing an epidemic consume his community. Leaders, including the one in the White House, were content to let AIDS kill a generation. Mould later realized why his mind wandered back there for Blue Hearts.

“We have a charismatic, telegenic, say-any-thing leader being propped up by evangelicals,” he says. “These f*ckers tried to kill me once. They didn’t do it. They scared me. I didn’t do enough. Guess what? I’m back, and we’re back here again. And I’m not going to sit quietly this time and worry about alienating anyone.”

Recorded at the famed Electrical Audio in Chicago with Sorenson engineering and Mould producing, Blue Hearts nods to Mould’s past while remaining firmly planted in the issues of the day. Acoustic opener “Heart on My Sleeve” catalogues the ravages of climate change. “Next Generation” worries for who comes next. “American Crisis” references “Evangelical ISIS” and features this dagger of a line: “Pro-life, pro- life until you make it in someone else’s wife.”

“There are songs that have no room,” Mould says, laughing. “The other songs, there’s room. There is room for imagination on the second half of the record.”

That’s where the songs turn personal in a different way. Tracks like “When You Left,” “Siberian Butterfly,” and “Everyth!ng to You” are grounded in personal relationships. “Racing to the End” captures the economic disparity of Mould’s neighborhood, and “Leather Dreams”… well, maybe Jon Wurster put it best.

“Jon turns to Jason and asks, ‘Is this the dirtiest song you’ve ever played on?’” Mould recalls with a chuckle. “I clearly did not put the edit tool to that one. Those are all pretty true bits. What kind of person could possibly have a life like that?” He laughs again. “Says the author.”

“Leather Dreams,” “Password to My Soul,” and “The Ocean” were composed during a writing binge before a January 2020 Solo Electric tour, when Mould stayed up for three straight days. “Songs just kept coming out,” he says. “‘Leather Dreams’ and ‘The Ocean’ both appeared within hours. I barely remember writing them.”

That feels right for an explosive, hook-laden album like Blue Hearts. Only there’s nothing forgettable about it.