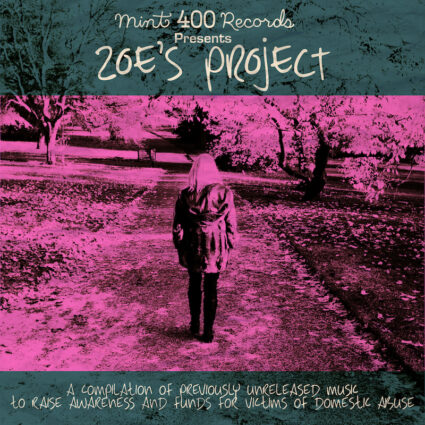 When label owner Neil Sabatino of Mint 400 Records got a teary phone call from one of his artists he admits “It was one of the most heartbreaking phone calls I’ve ever received”. A long time artist on their roster, drummer Zoe Ekonomidis of the Jersey City band The Components had called Sabatino to talk about an abusive home situation she had been dealing with for years. Immediately the two started to discuss how to bring awareness to the situation and what could be done to help others that were trapped in similar situations.

Soon the label had collected over 30 songs all from different artists on the label who wanted to help out. The compilation bears the name of the brave person who put this all in motion and is aptly titled “Zoe’s Project”. The plan was for the compilation to be available for just $5 and 100% of the proceeds from Bandcamp are being donated to Janie’s Fund. Janie’s Fund is a philanthropic initiative created by Steven Tyler in partnership with Youth Villages to bring hope and healing to girls who have suffered the trauma of abuse and neglect. As well the label offers a direct link for anyone who just wants to donate to support the cause. That direct link to donate HERE! The album is also available on all streaming services worldwide.

Ekonomidis had this to say about the outpouring of support, “Thank you Mint 400 and family for giving me an opportunity to speak out about Domestic Violence and including music as part of this mission. Music is one of the most powerful ways to send a message.” She then added, “If my bad situation helps to shed light on the amount of domestic abuse that happens around this country then I am happy to have said something. Domestic abuse is something that does not get talked about a lot and this compilation of music represents a whole bunch of artists that care enough to say something.”