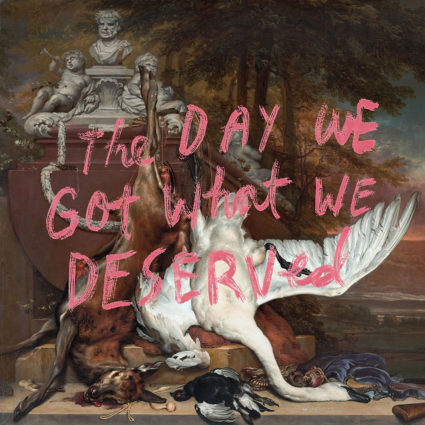 Trade Wind - The Day We Got What We Deserved

Trade Wind are a band with one very clear directive: anything goes. Formed in 2013 as a means of exploring sounds and styles outside of their main projects, the group—made up of Jesse Barnett (guitar/vocals), Tom Williams (guitar), Andrew McEnaney (drums), and Randy LeBoeuf (bass)—have prioritized unfettered creativity above all else, channeling their four distinct musical personalities into an exciting catalog full of contrasts and contradictions. Now with the release of their third full-length, The Day We Got What We Deserved, Trade Wind are pushing that core idea further than ever before with their most unexpected sonic turn yet.

The members of Trade Wind each have extensive resumes that stem from punk and hardcore, and expand into all corners of music. Barnett fronts Stick To Your Guns, Ways Away, and his solo project Wish You Were Here; Williams plays in Stray From The Path; McEnaney is in Structures, END, and has performed live with disparate artists like Charlotte Lawrence, Tate McRae, and Kai; and LeBoeuf is an accomplished producer/engineer in his own right, working on recordings for bands like The Acacia Strain, Kublai Khan, and Gideon. But whereas those endeavors often involve the organic guidelines that develop in established musical projects, Trade Wind was formed specifically to throw any strictures out the window. “Our other bands have expectations,” Barnett explains. “But with Trade Wind the only guiding principle is that we can do whatever we want.”

The Day We Got What We Deserved is sure to surprise even longtime fans who have come to expect the unexpected from Trade Wind. Each of their releases build upon what came before—from the driving post-hardcore of 2014’s Suffer Just To Believe and 2016’s You Make Everything Disappear, to the widescreen indie rock of 2019’s Certain Freedoms—but The Day We Got What We Deserved dives headfirst into sophisticated rhythms and stunning atmospherics that were previously only hinted at. A genre-blending amalgam of trip hop beats, lush soundscapes, and Barnett’s songwriterly melodies, the album began with the sort of long-distance collaboration that many bands turned to in 2020. Unlike previous Trade Wind releases the process began with McEnaney and LeBoeuf taking the lead. McEnaney explains, “I had just started getting into recording myself when the pandemic first hit in March. I didn’t know anything about the engineering process, but I saw the lockdown as a good opportunity to dive in head first and start making different loops just to stay creative.” By the end of the month, he had a surplus of ideas that he began sending to LeBoeuf to develop into songs. “Randy would send me videos of what he was doing to my drum loops and I couldn’t believe it,” McEnaney continues. “We sent the music we had to Tom and Jesse and they played a huge role in making the ideas more ‘song friendly.’ I really think we made the most out of a strange time.” (continue reading full bio in download folder)