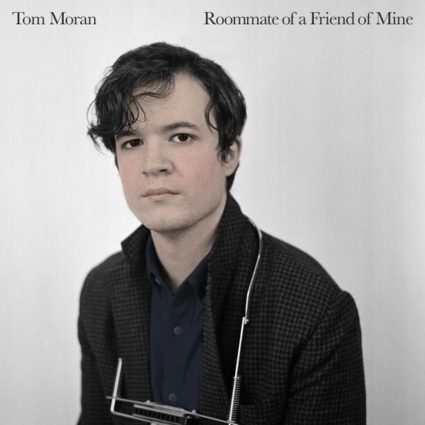 Tom Moran - Roommate of a Friend of Mine

“bright-eyed and open-hearted folk pop” – Under The Radar

Of the myriad New York City references that have etched a permanent place in pop culture lore, New York, I Love You But You’re Bringing Me Down might be the one that singer/songwriter Tom Moran relates to the most. It’s not that he actually feels that way himself, mind you, but he understands how you might be tired of New York-based artists presenting their world as if it’s the center of the known universe. As much as Moran, a native to the area, can marvel at the legacy of music and film that’s immortalized the Big Apple, when he sings about the city inhaling him whole or, say, being stuck in traffic on the Brooklyn Bridge, he’s just a person trying to get home. And in the rare instances where any famous landmarks appear on his full-length debut Roommate of a Friend of Mine, Moran strips away the glow of coolness that so often enshrouds them, making space for the kind of quiet introspection we rarely associate with the metropolitan grind.

Kicking off with the gentle strum of a track, appropriately enough, titled “Hermit”—it doesn’t take long before Roommate of a Friend of Mine makes it abundantly clear that Moran doesn’t need you to imagine yourself walking the same streets that he has. He doesn’t need you to transport your imagination to neighborhoods that have been famously sung about, rapped about, or served as settings for iconic movie sequences. This is an album that instead points you very much back down to earth, and what Moran prefers is that his songs find their way to wherever you happen to be, to hit you where you live in every sense of the term. After all, one can feel out of place—and learn how to find one’s place—anywhere. And it’s between those two poles of experience that a lifetime’s worth of highly relatable, almost beautifully mundane, interactions unfolds across the ten slice-of-life turns of rippling folk-pop the album showcases. (Continue reading full bio on download page)