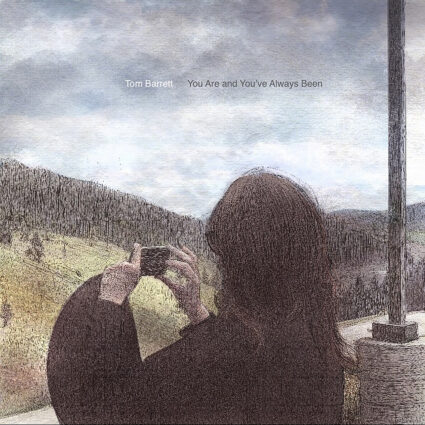 Tom Barrett - You Are And You've Always Been

You Are and You’ve Always Been is the third full-length album from Jersey City-based singer-songwriter Tom Barrett (Overlake, American Watercolor Movement, The Everymen). Following the unabashed lo-fi aesthetic of 2020’s 051480, this new self-recorded collection of songs again showcases the folksier side of Barrett’s musical personality, taking cues from other mellow-voiced influences such as Nick Drake and Lou Barlow. Similar themes of domesticity and escape that colored 051480 are further explored on the ten tracks that make up You Are and You’ve Always Been, this time with a much cleaner sound and more expansive arrangements.

The title track features more of Barrett’s gentle guitar picking and softly sung baritone, accentuated by sparse melodic piano and an underlying synth part that lends the song some fullness and dimension. The lyrics paint a picture of a sleepless night and being in a vulnerable or desperate state, where your senses can be more heightened than usual, and your mind can invent scenarios where you feel alone, missing the person you love even as they’re sleeping right beside you. The song is evocative of Gordon Lightfoot or Sea Change-era Beck, while Barrett’s deep-voiced, almost conversational delivery could bring to mind for some either Mark Eitzel or The National’s Matt Berninger.

The new album was recorded over the span of a year and a half, mostly in the Passaic, NJ rehearsal space that Barrett has occupied for the past several years, but it wasn’t the record he initially set out to make. “Originally, I’d wanted to do a rock record with a couple of acoustic songs sort of sprinkled throughout,” Barrett says, “but more acoustic songs seemed to come together quicker so I ended up doing the reverse.” Fortunately, this twist of fate plays well into Barrett’s plan of going forward in the performance realm. “I definitely see myself playing more solo shows than band shows in the future, not that those will disappear completely, but it makes sense to have something out there that’s a better representation of what I’ll be doing live most of the time.”