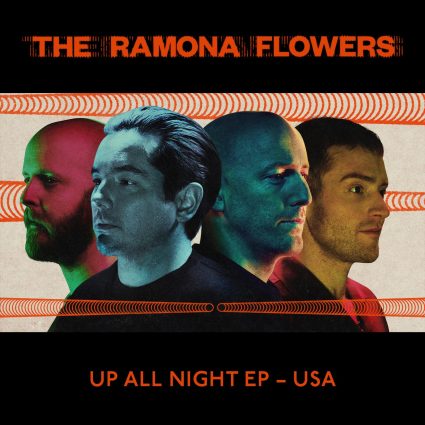 The Ramona Flowers - Up All Night [EP]

“‘Up All Night’ (is) coolest collab with a super legend Nile Rodgers (and) is out now for our dancing pleasure!” – The Honey Pop

2022 has been The Ramona Flowers’ most prolific year so far. In addition to their US tour (where they supported Barns Courtney US Tour and played LA’s buzzy Peppermint Club) they recently headlined a packed out Omeara in London. This Summer saw The Ramona Flowers support the likes of Tom Grennan in the UK, and rock heavyweights Muse and Placebo at Firenze Rocks in Italy. Showing no signs of slowing down, the band have been confirmed to support Reverend & the Makers on their UK Tour in Feb 2023.

The Ramona Flowers – Steve Bird (vocals), Sam Dyson (guitar), Dave Betts (keyboards, guitar) and Ed Gallimore (drums) – have hit on a rich new seam of creativity meaning that, for a band maturing into its fourth album, they sound a lot like a group just about to release its debut. From these upcoming songs a story emerges: of four men resisting, accepting then finally celebrating adulthood. “This is the best chance we’ve ever had,” drummer Ed Gallimore states. “And we’re making the best music we’ve ever made.”  “We’re hungry,” Steve states. “This band is still why I get up every day, what I think about every day. I live and breathe it every day and I refuse to go through the motions.” The new music’s a celebration of sorts, he adds. “A celebration of still existing, still being alive, still making music and still having something to say.”