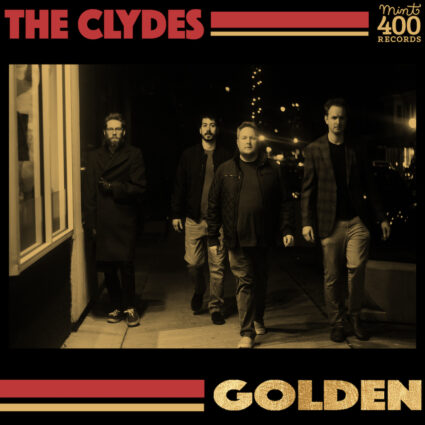 “We’ve been on The Clydes beat since late 2013 and just like a fine wine, they’re only getting better as time goes on.” – Speak Into My Good Eye

“They write polished tracks that, while tipping their hats towards the group’s classic rock influences, don’t feel dated. That’s not an easy skill to hone.” — Bobby Olivier, NJ.com

Despite live music being on and off and life in a near-constant state of disruption, The Clydes had a handful of songs and ideas they were too excited to sit on. So they gathered a few times during the pandemic at a studio in their native New Jersey to capture it all. The result is Golden, a new five-song EP on Mint 400 Records that finds the alt-rock band exploring new sonic and thematic directions, according to band members — and brothers — Brent and Brian Johnson.

“We are becoming more obsessed with sound and counterpoint melody,” guitarist Brian Johnson says. “We love film scores, loud amplifiers, movement, surprises, and a catchy chorus. This EP is who we are.”

Included is a biting, riff-driven song about political division. There’s also a brooding-turned-bright tune about finally finding love. A pulsating, synth-laced track about embracing silence. A groove-centric number about yearning for the one you’re not with. And a sinister-yet-melodic song about a mysterious meeting in the woods.

“These are some of our favorite songs we’ve ever written,” singer Brent Johnson says. “They’re filled with texture and unexpected elements and represent a range of emotions many of us have grappled with these last few years.”

Golden was recorded in spurts over the last year at Retromedia Sound Studios in Red Bank, N.J., and produced by studio owner Adam Vaccarelli along with Brian Johnson. The band consists of the Johnson brothers with bassist Andrew Orlando and drummer Pete Gambino.