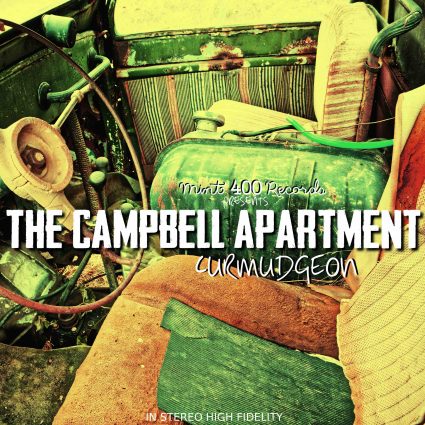 Hailing from San Francisco The Campbell Apartment currently are Ari Vais (Guitar & Vocals), Kevin Frank (Guitar & Vocals), and Jon Hand (Drums). The band has been around the block as Vais’s project has existed for over decade on both coasts but don’t take our word for it on how special this band is, here’s what other people had to say:

“Why is it so hard to write about The Campbell Apartment? I’ve been listening to Ari for a long time and I still have no idea how to describe his music to someone who hasn’t heard it. Punk rock? Garage rock? Certainly elements of both but neither one really makes you think cerebral, does it? There isn’t a tidy little category that describes being tossed about by rapid-fire angst and devious, literate wordplay, bouncing from one grinding angry guitar into a fragile, lovely harmony before you even realize it’s happening. There’s a restless energy in the Campbell Apartment — a willingness to bend things to the point of breaking, to follow each frenetic aside into its own space, leaving no square inch unexplored. I always thought Ari would make a great novelist, but listening to Curmudgeon, it occurs to me that any one of these songs would make for a truly compelling film: our narrator, the everyman, antihero, driven to distraction by the banalities of modern life and complaining loudly, yet somehow with a lot of heart. Ari has a storyteller’s way of inhabiting these dark spaces, breathing life into each scene by illuminating human nature’s good side and dwelling on it for just long enough before smashing it to bits. I do hope you will enjoy this album as much as I do.” – Chris Collingwood | Fountains of Wayne

“The world of may be crashing and burning—but smart, witty, heartfelt Indie rock is alive and #@!$ing well. So at least we got that going for us.” – Ben Deily | The Lemonheads

“A rather impressive slate of work.” – Ghettoblaster Magazine