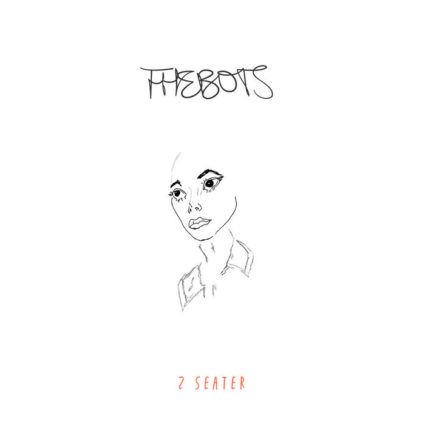 For the better part of the past 12 years, Mikaiah Lei of The Bots has spent his adolescence in the spotlight. The Bots released two studio albums, toured around the world, landed glossy magazine spreads, and performed live everywhere from Coachella to Glastonbury in that time. Lei was just 21 years old the last time The Bots put out an album, 2014’s Pink Palms. Now, after seven transformative years, Lei has a brand new outlook on life and himself—and he’s got the remarkable new album, 2 Seater, to show for it.

2 Seater is a massive evolution from the early days of The Bots. Back then, Lei spent most of his time channeling garage rock with his younger brother. Instead, this new album sees him putting a pop spin on his own creative indie-rock flair. Drawing influence more from Talking Heads and Cocteau Twins than Black Flag or Minor Threat, these songs capture Lei’s natural ability to pen catchy melodies without sacrificing any of the raw guitar work that established The Bots as a force to be reckoned with.

“People would never refer to our band in the way I viewed it,” Lei says of The Bots’ early days. “We were always labeled as a ‘US punk band.’ I love punk music and I get why those references stuck for so long, especially because we started out trying to play as fast and as loud as we could, but we were a younger group who wanted to prove everyone wrong who thought kids couldn’t play rock. I love all genres of music and wanna continue to make pop music at its core, but I’m definitely interested in exploring many genres and styles of music.”

Lei draws inspiration from everything around him for The Bots’ new album, be it “sad girl” movies like Eighth Grade, rock climber Alex Honnold’s jaw-dropping achievements, or endless YouTube videos of unlikely animals forming close bonds. He filters these through his personal experiences, lending his songs broader themes of relatability, perseverance, and curiosity despite their unlikely, and rather specific, origin stories.

Arguably, the most thrilling sound on 2 Seater is Lei’s masterful use of vocal harmonies. Without straining his voice, he’s able to pack vibrant, joyful punches into his singing on “Girl Problems,” where he plays up 2000’s indie-rock stylings with dreamy guitar riffs and wordless coos. Afterwards, during “DYKMN,” he uses his voice as a backing melody to radiate warmth. Even on a stripped back number, like “Looking Back,” he opts for a lower register that gives the album a mood-boosting feeling.

2 Seater also boasts a diaristic style of songwriting that may not be narrative in a novelistic sense, but it’s poignant and relatable in an honest way. “I have a deep appreciation for artists who are storytellers because I don’t write lyrics like that,” says Lei. “I’m trying to better myself constantly and I’m always looking to other things for inspiration.”

For him, that means allowing the songwriting process to permeate nearly every facet of his life, and it’s the type of singular songwriting that brings to mind similarly creative luminaries like Peter Bjorn & John or Bombay Bicycle Club. The difference between them and The Bots, of course, is that only one has the inimitable heart of Lei’s coming-of-age experience.