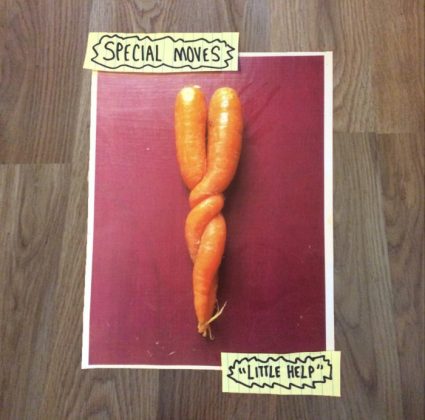 “Based out of the indie-pop heartland of Olympia, Washington, Joshua Hoey has been working on his, “lo-fi, small-scale cultural production”, under a variety of guises for the best part of two-decades. Joshua’s latest project is the, “open-source DIY rock band”, Special Moves, a sort of intriguing middle ground between a solo-project and a collective, where anyone is encouraged to turn up at any given moment and do their thing. Somehow that has resulted in not just a thrillingly varied live show, but also an upcoming album, Little Help, released on Joshua’s own Reflective Tapes label, in collaboration with both Jigsaw Records and Solidarity Club.” – For The Rabbits

“If you want something done right, do it yourself” may not be an entirely accurate translation from the original French, but it’s proven to be a powerful strategy over the last forty years of American underground rock music. Special Moves is the latest name Olympia’s Joshua Hoey has applied to their lifelong project of lo-fi, small-scale cultural production. Josh has played fuzzy, energetic rock music in living rooms and basements – even the occasional rock club – for almost two decades. The rough outlines of their sound are SUPERCHUNK, ARCHERS OF LOAF, BUTTERGLORY, GUIDED BY VOICES, SUGAR, and early 90’s indie rock generally. The specific sparks that have fed the drive to write, record and travel were generated by random short-run seven-inches, cassingles, and one-off tracks on tape comps. Special Moves is an attempt to continue the proud legacy created by folks with talented friends and an uncontrollable urge to document the creativity and vibrancy that would otherwise fade from view. Special Moves is an open-source rock band. Lineups and instrumentation vary from gig to gig, one recording to the next. Collaborators are encouraged to bring their unique stylistic choices to bear – what’s YOUR special move?