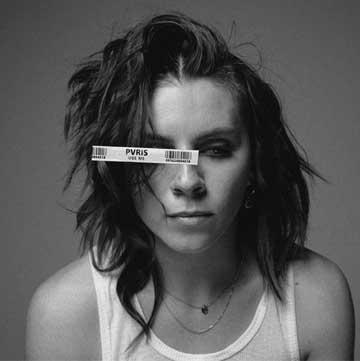 Warner
“After years of public pretending, Lynn Gunn has finally found the confidence to step out as the sole creative force behind PVRIS. With that revelation comes new album Use Me, her most singular vision yet. But, she reveals, the battles with the same dark forces continue in order to bring light to others…” – KERRANG
Personal strength materializes at just the right time. Ultimately, life’s circumstances and challenges prompt perseverance. Internal power fully and outwardly awakens for PVRIS frontwoman, multi-instrumentalist, songwriter, and producer Lynn Gunn on her third full-length album and 2020 debut for Warner Records, Use Me. She channels the ups and downs of an unbelievable two-year journey into pop conjurations of glitchy beat-craft, airy guitars, and spell-binding vocals. In doing so, she steps into a new chapter earmarked by focus, fire, and fearlessness manifested loud and clear.

“I’ve tapped into parts of myself I had shrunk for so long,” she confesses. “They’re the parts I was afraid to show and things I was scared to admit. External circumstances weighed me down, and I didn’t allow myself to speak up in my relationships. I was fucking tired, but I didn’t want to be trapped anymore. I was always strong and in the power seat, but I had to own it externally. I made a decision not to shrink myself again and to truly be seen for the first time in my art. I was finally able to take ownership for the things I’ve done and continue to do as PVRIS. It was a new era for me.”

A lifetime devoted to music set the stage for this realization. Growing up in Lowell, MA, Lynn taught herself drums, guitar, and bass by sneaking into her brother’s bedroom in grade school and playing for hours on end. Eventually, they started jamming covers together, but she had already developed quite a bit of proficiency on her own. During computer lab at school, she discovered production and recording software, tuning out the day’s lessons in order to tinker with her very first beats. This process carried over to PVRIS, which she officially formed in 2013 joined by band mates Alex Babinski [guitar, keys] and Brian MacDonald [bass, keyboards]. A year later, White Noise inspired a growing fan base and scored a silver certification in the UK. Meanwhile, 2017’s All We Know of Heaven, All We Need of Hell bowed in the Top 5 of the Billboard Top Alternative Albums Chart and ushered their stream tally past 220 million by 2020. Over the next seven years, they performed everywhere from Coachella, Lollapalooza, and Reading & Leads to Jimmy Kimmel LIVE! in addition to supporting Muse, Fall Out Boy, and 30 Seconds To Mars in arenas and selling out headline dates worldwide. At the same time, Vice, The New York Times, Medium, Rolling Stone, Billboard, and more extended praise. Advocating for the LGBTQ community, she supported organizations such as The Ally Coalition. (continue reading full bio in downloads folder)