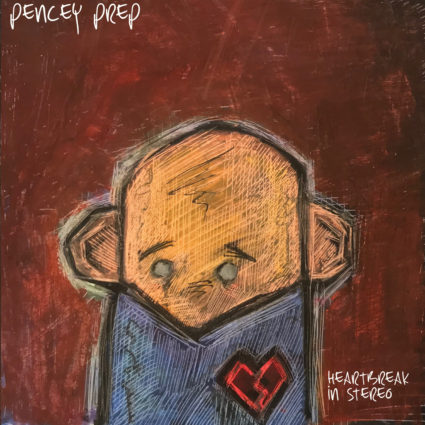 “I’d like to take a quick moment & thank everyone that was involved in the Pencey release and to all of you that have loved that record for so long. it’s a crazy amazing feeling, & I’m so happy we were able to celebrate what my friends and I made all these years later.” – Frank Iero

It was the summer of 2000 when Frank Iero (My Chemical Romance, Death Spells, Leathermouth) had left his band Sector 12, his first real punk rock band and started Pencey Prep with John McGuire (Brine & Bastards, Leathermouth) and Shaun Simon. Through friends at a party they found drummer Tim Hagevik and through previous hall shows together guitarist Neil Sabatino (Fairmont). All the pieces were in place as the band began to write their epic tale of teenage heartbreak, which would be aptly titled “Heartbreak In Stereo”. The band had just witnessed in a garage in Westwood New Jersey, the band Thursday in an electric performance to a crowd of 20 people as they began to mold their sound which was a mix of rock, metal, punk, hardcore, pop and indie. They didn’t realize only months later they would be joining them as label mates.

Pencey Prep landed on shows with note-able bands like Nada Surf multiple times, The Strokes, New Found Glory, Midtown, Brand New, Thursday, Atom and His Package, My Chemical Romance and even Jack Antonoff of Fun’s old band Outline all before any of those bands were big names. The band played classic spots like CBGB’s, Maxwells, Asbury Convention Hall just to name a few. As Pencey Prep began and ended in only a short time and as Frank Iero joined My Chemical Romance their fans gave new life to the long forgotten Pencey Prep album.  A cult favorite for the last 20 years that was big with the MySpace crowd and then forgotten again as their old label went defunct.

For the first time in years the album is available again on all streaming services and mp3 outlets worldwide. The band Pencey Prep for fans of the North Jersey scene were definitely a bridge between Thursday and My Chemical Romance and hopefully all these years later this emo epic of teenage hopelessness and sorrow with plenty of Catcher In The Rye references is still as potent as when it first came out.