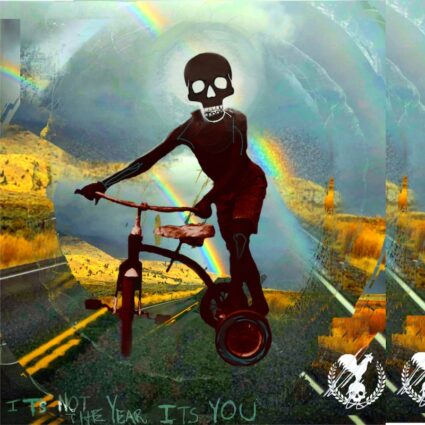 MOsley WOtta - IT’s NOT THE YEAR IT’s YOU

IT’s NOT THE YEAR IT’s YOU features eight new tracks that explore identity prejudice, radically inclusive care, ecological stewardship and the responsibility we have to each other. Released by Wake Records, this album invites reflection on themes timely and timeless.

This is MOsley WOtta’s 5th album. In 2021, NPR named MOsley WOtta one of 11 Oregon Artists to Watch.

THE WORDS- MOsley WOtta is a public figure of speech, an award winning artist and collector of rejection letters. WOtta’s previous release THIS IS (NOT) ALL THERE IS was an NBA SPOTLIGHT FEATURE at the OREGON Trail Blazers 50th anniversary game. His 2019 group exhibition in collaboration with High Desert Museum won the 2019 “Charles Redd award for Excellence”. A touring performer and artist MOsley WOtta recently finished his tenure as the first Creative Laureate of Central Oregon. He is 2021-23 Fields Artist Fellow.

THE MUSIC- Colten Tyler Williams is a composer, producer and sound designer. As long time collaborator, producer and guitarist of Mosley Wotta, Colten has also produced music and remixes under the alia’s Collothen and in most recent years Witch Eyes for both National and International Labels, FIms. His compositions and sound design are featured in films such as A Stone in the Water, 7 Hills, Radiance of Resistance, Personhood, Pickmans Model, Statement of Randolf Carter and P.M.S.