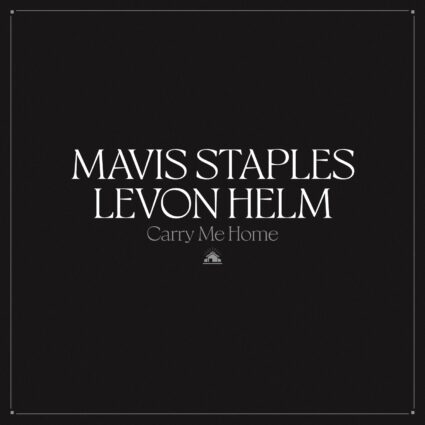 Captured at Woodstock, New York’s Levon Helm Studios in the summer of 2011, ANTI- Records is excited to announce ‘Carry Me Home’, a new album that showcases the music of Mavis Staples and Levon Helm, two of the past century’s most iconic voices who came together in love and joy, tracing their shared roots and celebrating the enduring power of faith and music. Watch and listen below to their version of “You Got To Move” that also features footage of Mavis and Levon rehearsing together.

Neither Staples nor Helm knew that this would be their last performance together—the collection marks one of Helm’s final recordings before his death—and listening back now, a little more than a decade later, tunes like “This May Be The Last Time” and “Farther Along” take on new, bittersweet meaning. The result is an album that’s at once a time capsule and a memorial, a blissful homecoming and a fond farewell, a once-in-a-lifetime concert—and friendship—preserved for the ages.

“It never crossed my mind that it might be the last time we’d see each other,” says Staples. “He was so full of life and so happy that week. He was the same old Levon I’d always known, just a beautiful spirit inside and out.”

The pair’s mutual love and admiration is on full display on ‘Carry Me Home’, which features a mix of Staples’ and Helm’s bands operating at the peak of their powers as they work their way through an eclectic setlist of tunes made famous by the likes of Nina Simone, The Impressions, Bob Dylan, and The Rolling Stones.

“My dad built The Midnight Rambles to restore his spirit, his voice, and his livelihood,” says Helm’s daughter, Amy, who sang backup vocals with her father and Staples at their performance. “He’d risen back up from all that had laid him down, and to have Mavis come sing and sanctify that stage was the ultimate triumph for him.”

Opened to the public in 2004, Levon Helm Studios—which still hosts regular concerts and recording sessions to this day—is a magnificent, rustic space with broad wooden beams and a soaring, vaulted ceiling. Helm and fellow Band-mate Garth Hudson designed the room to be both sonically and socially perfect, an intimate gathering place where musicians and their fans could join in a shared night of musical transcendence.

When it was all over, Staples could hardly believe how quickly the time had flown. She dreaded the thought of leaving Woodstock, of leaving Levon, but duty called her back on the road, and so she ended her week the way it began: with a long embrace.

“We hugged and hugged and hugged,” Staples recalls. “I just held on to him. I didn’t know it’d be the last time, but in my heart and in my mind, Levon will always be with me because I take him everywhere I go. Yes, indeed. I can see him right now. And some sweet day, we’ll be together again.”

Staples and Amy Helm will also be performing together on the album’s release day, May 20, at Brooklyn Academy of Music and at the Dirt Farmer Festival on May 21 with the Midnight Ramble Band and others.